I’m thrilled to finally be able to share this with you.

A few weeks ago I had the great privilege of watching 35 minutes of the new Disney•Pixar film, Coco, at Pixar Studios in California. I’d waited for this for years, since first hearing Disney was producing a film featuring Mexican culture.

Never has a Disney film moved me so, and you know how much I love Disney films. Coco vibrates with music, color, and culture, but it’s all done with the utmost respect for our Mexican traditions. It’s funny, quirky, heartfelt and lyrical. The meaning of Día de Muertos is interwoven throughout, without needing to have everything explained, because the story is not about Dia de Muertos, but rather, following your passion, loving your family and being true to who you are.

As you know I was born in Mexico and lived most of my life in Guanajuato. I also have family in Michoacán. As I watched Coco, my heart traveled to my pueblo, my music, my food, my family. The hair stood up on my arm and my skin tingled, it felt authentic to me, and I felt pride.

In the coming weeks, I’ll share many more details about Coco with you, but today I wanted to share a few things I learned from writer and co-director, Adrian Molina, producer, Darla K. Anderson, and director, Lee Unkrich during my trip to Pixar.

7 Things you Need to Know about Coco

A Love Letter to Mexico

In just 5 words, writer and co-director, Adrian Molina, summed up his excitement about Coco, a phrase that touched me deeply.

They pitched the concept to John Lasseter, CEO of Pixar Animation Studios, Walt Disney Studios, and DisneyToon Studios, in September of 2011. Director, Lee Unkrich, shared that he didn’t have a story at that time, but the notion of setting a story there felt so unique to John that just two weeks later the team was on a plane to Mexico to start the research process.

The first of many visits over the course of three years, they visited plazas, markets, museums, churches, haciendas, and cemeteries in Mexico City, Oaxaca, and Guanajuato. They saw a play in Xochimilco and spent time with families in Tlacolula, Tlalixtac, El Tule, San Marcos Tlapazola, and Abasolo.

If you, like me, wondered about the film’s name, Coco comes from the hero Miguel’s great-grandmother’s name. The family matriarch, she acts as keeper of the family stories and secrets.

During my visit to Pixar Studios, I wanted to know how my non-Mexican blogger friends felt about the film. My heart filled with joy and pride as I could see my towns, my music, my food and my people so lovingly represented, but how would others see it? Their responses were all positive and made sense to me. One said, “I see my family” in the film, “I remember I used to listen to my grandfather playing music at home”, etc. Adrian, Darla, and Lee shared with us the film’s universal qualities.

Adrian: “…it’s definitely about family…but it’s also very much a film about following your passions and making choices in life…”

Darla: “…we entertain audiences… immerse them in a grand adventure…escape into a whole new world and go along this journey with our protagonist and his companion…I think this film has universal qualities…”

Lee: “…I think being able to chart your own path in the context of wanting to be connected to your family is something that is very universal across cultures…”

RELATED POST: Fun Facts About the Skeletons of Coco

Coco and The Book of Life

I have been asked whether there are similarities between Coco and The Book of Life. Both films are beautiful works of art, yet, even though I’ve seen just 35 minutes of Coco, I can assure you the stories, characters, music and animation are quite different.

During the interview with Coco’s director, Lee Unkrich, he said they were,  “… under way with this film before we were even aware that … happening…I was happy that it came out a few years before us, and that we had the opportunity to see it and make sure that we were telling a story that was unique and different… We’re confident that our film…. …completely different story and I think it’s great that there are multiple stories kind of set in the same culture. We’ve since gotten to be good friends with Jorge Gutierrez who directed Book of Life, and we were supportive of his film and he’s been very supportive of our film.”

This is an interesting tidbit. The final Coco we’ll see in theaters, November 22, is very different from the original story. The first story was about a character dealing with his own grief. The team, however, soon realized that the story was a bit heavy, which was the antithesis of what Día de Muertos is all about. So they started over again, centering the film on the family and an essential theme of Día de Muertos, which is “never forgetting.”

When you watch Coco you’ll see and hear some Spanish (even in the English version). Adrian shared that they wanted to infuse some of the language into the storytelling, because that’s so much a part of the culture. But don’t worry, the Spanish is used in contexts understandable to all.

Another interesting thing, even though the film will be in English in the USA, images, like business names or signs on the street in the animation, are in Spanish. Lee shares the reason for this, “… takes place in Mexico and it’s a Spanish speaking nation, we wanted to have that authenticity.”

If you happen to live in, or will be visiting, México, you are in luck! During my visit to Pixar, it was revealed that as a thanks to México, Coco will open at the Morelia International Film Festival (FICM) on October 20, 2017, and in the rest of México on the 27th. It will be the first time the festival has open with an animated film. Follow the action with #15FICM and #PixarCocoMX. 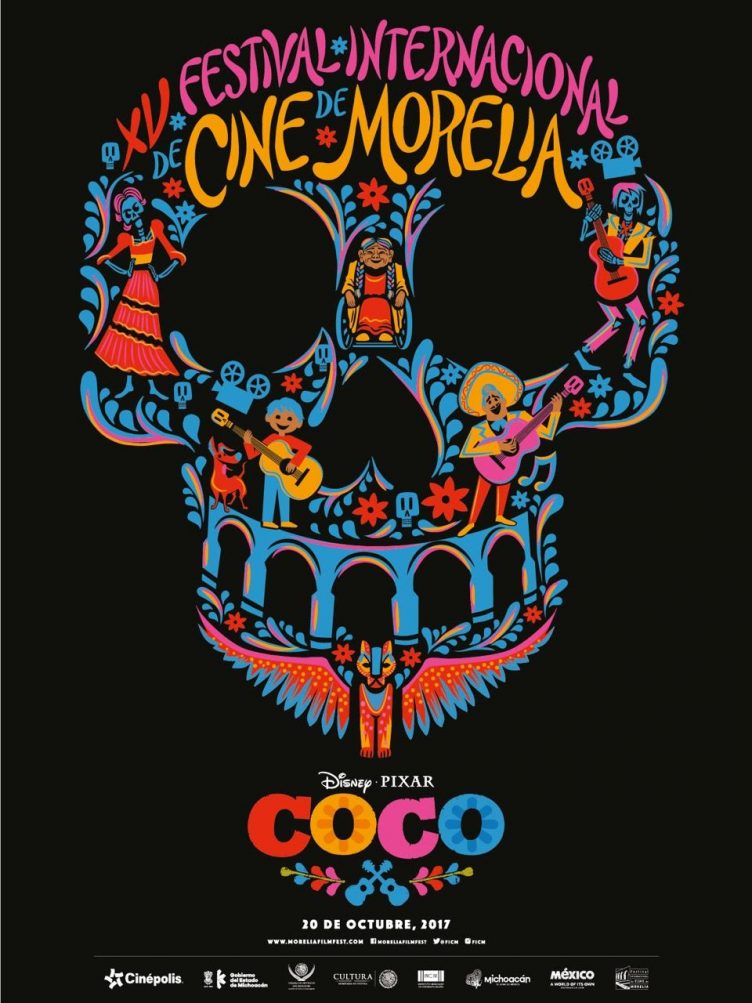 And one more thing.

Frozen fans rejoice! Enjoy the new Pixar short film, Olaf’s Frozen Adventure, just before Coco on November 22. I got a sneak peek of it a week ago during the Disney Social Media Moms Celebration at Disneyland. I enjoyed every minute of it and I’m sure it will bring you much joy and laughter, too. The short is the ideal companion to Coco, because it’s also centered on the concept of family traditions.

Check out the trailer.

Don’t forget to mark your calendars for November 22, 2017, the USA premiere of Coco. Meanwhile, enjoy the trailer!

WOW, what an amazing movie, the story starts getting better and better, such a beautiful story, with so much touching moments, amazing soundtrack, congratulations to pixar, total respect to you guys, Mexico is amazing!!! you learn so much about the Mexican culture, incredible…