Movie premieres are always fun, but the evening of November 8th was extra special for me. On that evening, Hollywood Boulevard at the El Capitan Theater was transformed into a bit of Mexico for the premiere of the much-anticipated, new Disney Pixar film, Coco.

Coco tells the story of Miguel Rivera and his family. Opening with the rich colors of animated papel picado, we learn about the family’s matriarch, Mamá Imelda (voiced by Alanna Ubach), as well as the Rivera family’s history as shoemakers and why the Riveras, in the words of Miguel, “are the only family in Mexico that doesn’t like music.”

Related Post: 7 Things You Need to Know About Coco

This presents a dilemma for Miguel because he loves his family intensely, but, for reasons he can’t explain, he also harbors an intense passion for music. Certain events on the morning of Day of the Dead reveal to Miguel that his great-great grandfather, Ernesto de la Cruz, was the most famous musician in Mexican history (Ernesto is voiced by none other than Benjamin Bratt. And I mean voiced! Who knew he could sing so beautifully!?!). This knowledge gives Miguel the courage to face his family and tell them about his passion for music.

Things don’t go quite as Miguel hoped, but his revelation unleashes an adventure that neither he nor his family expects.

When Miguel strums Ernesto de la Cruz’s guitar, found in his family crypt, something magical happens and Miguel suddenly finds he’s no longer with the living, but among his ancestors in the land of the dead.

Related Post: Fun Facts About the Skeletons of Coco

From the moment Miguel arrives in the world of the dead, a land of magical colors and what may best be described as visual emotion, his true adventure begins. Miguel finds himself with Mama Imelda, his great-great-grandmother and the family matriarch, as well as other members of his family. He also meets the lovable and charismatic character, Hector (voice acted by Gael García Bernal), who helps Miguel find his great-great-grandfather, Ernesto de la Cruz.

Together they face the film’s villain and discover the bonds of music and family are hard to break.

Coco is an artistic masterpiece. With each effort, Pixar pushes the frontier of their art further and the same is true for Coco. The animation, color palette, and Pixar’s special attention to detail surpasses, I think, even their own previous efforts. Their sensitive representation of Mexico, its streets, colors, traditions, music, and day-to-day life makes Coco ring true, and so it is breathtakingly authentic. More than once, my eyes filled with tears as I felt both pride in, and a yearning for, my family, my people and my traditions.

But Coco is much more. While it respectfully shares with the world the significance of Day of the Dead in Mexico, both its meaning and the reasons for existence, it would be inaccurate to say the film’s about Day of the Dead. The film is really about family and music, and it delivers them both with plenty of laughs, feeling, and reflections on self, ancestors, and opportunity to reflect on our own families.

Coco is an instant classic and I hope with all my heart that you will go see it at the theater. Take your family, you won’t regret it. It’s showing now in Mexico and opens in theaters on November 22, 2017, in the United States. 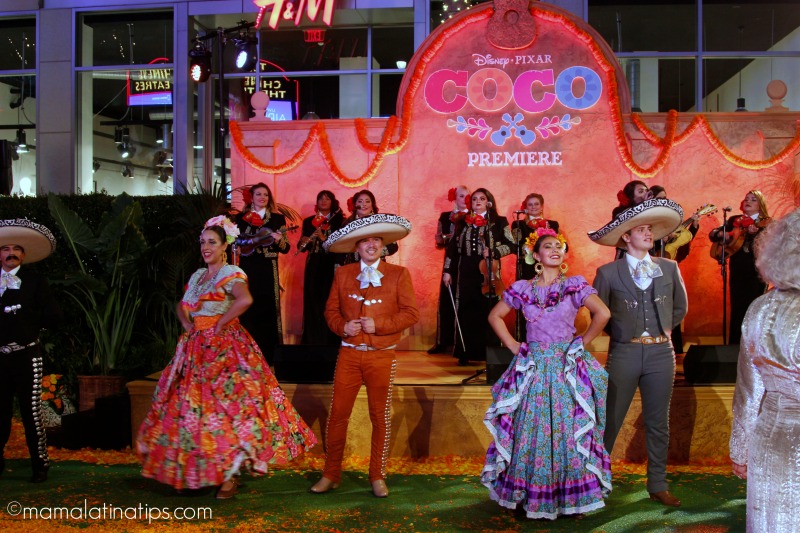 At the entrance of the premiere party, we were welcomed by mariachi and folk dancers. I felt right at home! And I’ll admit I felt empowered by my pride as a Mexican. I just let the music and colors fill my senses. 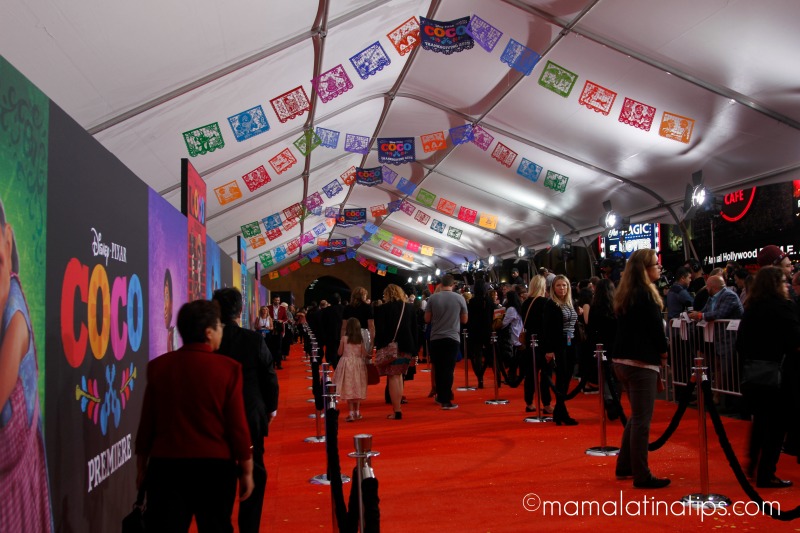 The night began with a huge party. Young and old enjoyed music, crafty activities, and delicious foods like tamales, tacos, elotes, salsas, and many others. My personal favorite was the chicken with mango salsa! 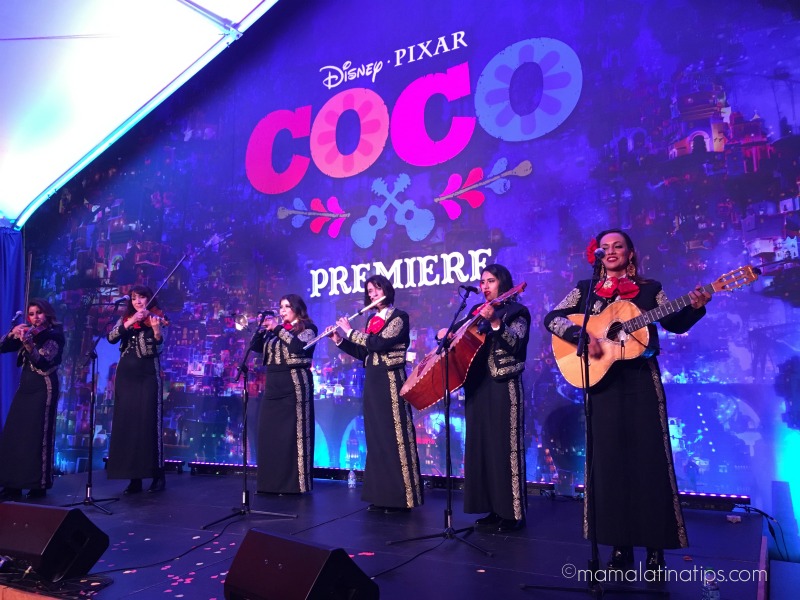 A little farther in, tables on both sides of a great room let me take part in fun activities like making paper flowers to wear in my hair. Other tables demonstrated how to make papel picado and some taught kids how to decorate flower pots, among many other fun, crafty endeavors. 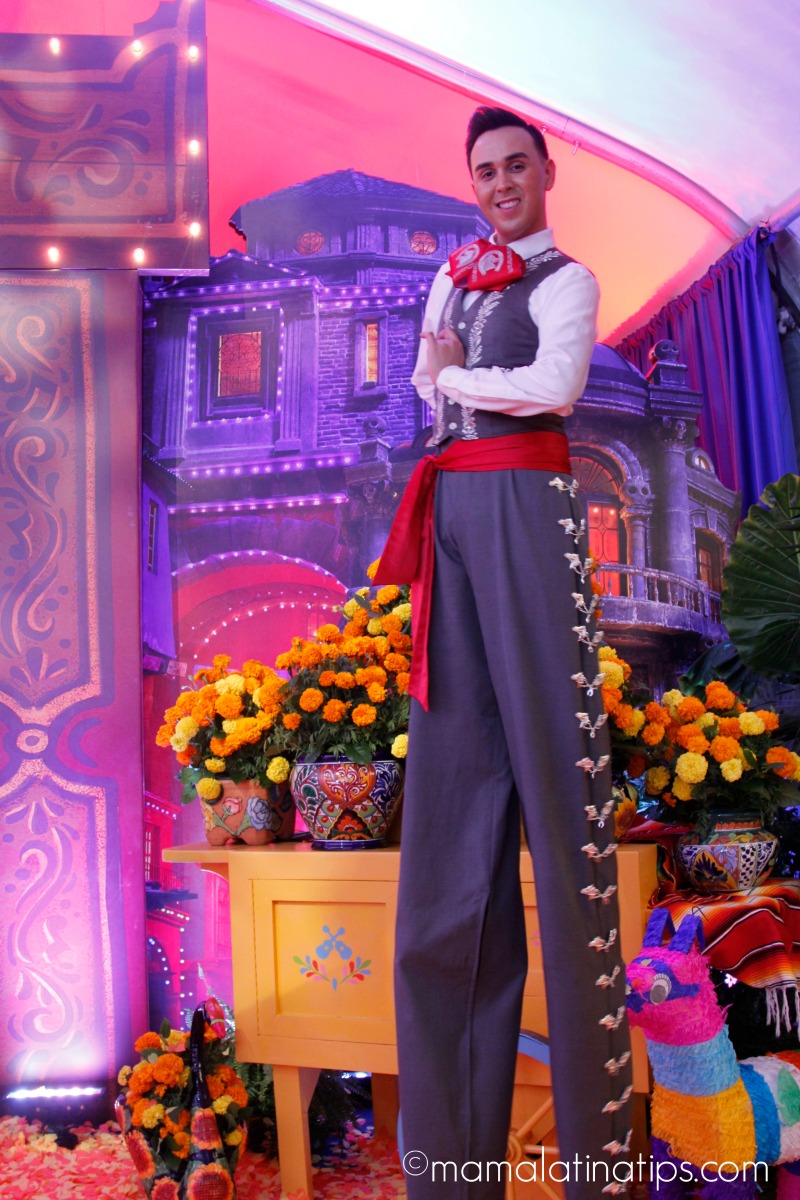 Special guests, actors, directors, animators, and their families mingled and enjoyed the party together. A little after 7 we all headed into the iconic El Capitan theater for the premiere. 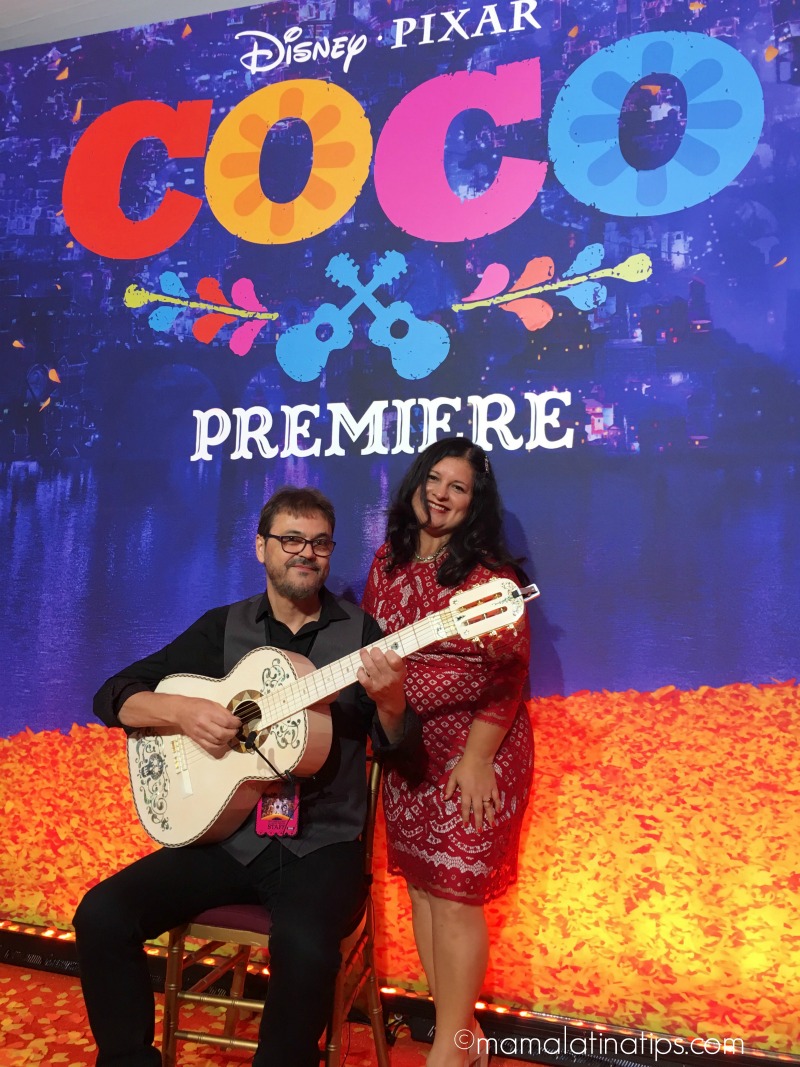 The curtain lifted to an animated short, Olaf’s Frozen Adventure, where Frozen’s charismatic characters entertained us with a new adventure full of tradition, laughs, and emotive moments, perfect to get us in the mood for the feature film.

Coco began in all its color and splendor, “A love letter to Mexico,” as writer and co-director, Adrián Molina, describes it.

Here are some celeb photos and more from the event, enjoy!