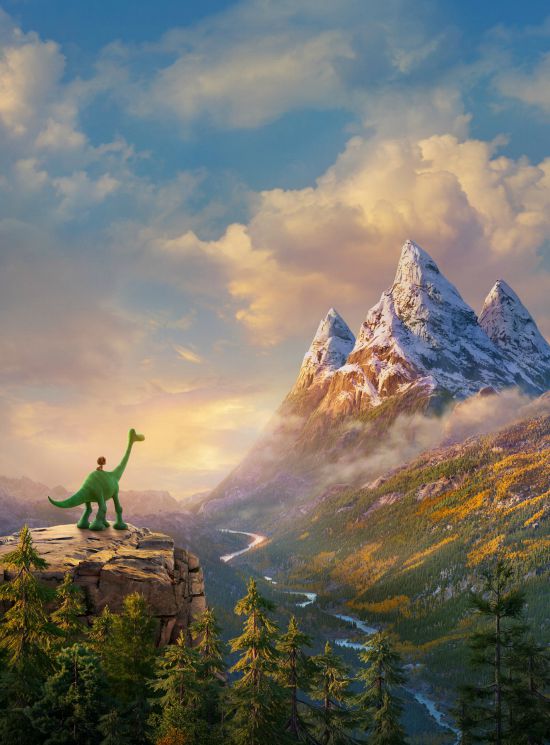 I promised I would bring you more about my trip to Pixar, so today I wanted to tell you about an enjoyable and interesting presentation I attended in the atrium of Pixar’s Brooklyn building. It featured the creative team from The Good Dinosaur (in theaters November 25th, 2015), Peter Sohn, Director, Denise Ream, producer, Sanjay Bakshi, Technical Director, and Sharon Calahan, Director of Photography and Lighting. They showed us how experiences from their research trips impacted the film. 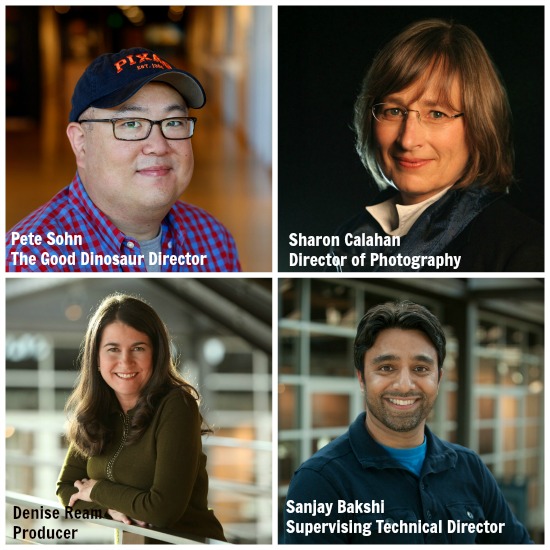 Pixar is famous for their meticulous research, and so it’s not surprising that they found themselves researching The Good Dinosaur in nature, not only to see what they could see, but to feel the grandeur of nature for themselves. I’ve always enjoyed hearing about these trips, so while we ate chili, quesadillas and s’mores, and with a fire in the fireplace, the team chatted about their trips to the Grand Tetons, Yellowstone, and Oregon. 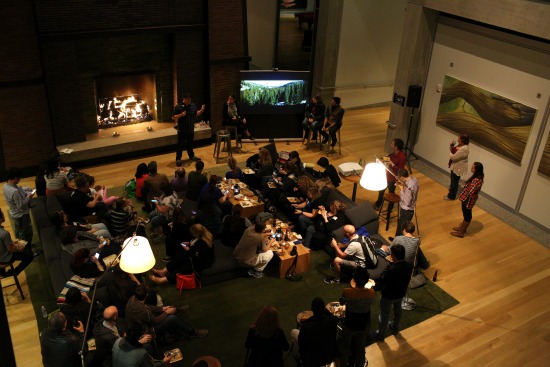 Director Peter Sohn said the trips really changed his life. He’d grown up in New York, and had never experienced stars from horizon to horizon before. “ stars for the first time. I have never witnessed those types of skies before..,” he said, “I could not believe the fidelity of the stars in the sky.”

In this photo from the film, the vastness of nature shows that even a dinosaur (see him in the foreground on the rock outcropping) feels small against a grand natural backdrop. Peter Sohn says, “…everything is so large it makes you feel tiny and so you start to have a weird kind of feeling of growth somehow where you get very inward.”

Nature’s temperament, its ability to change almost like a personality, made it into the film to, “Wherever we would go, Sharon would have these little things that she would say, …like if you don’t like the weather wait ten minutes, and boy, that was true, and that would really become something infected in me in terms of trying to make nature a character in our film.”

Denise Ream told us how the director said “…we literally wanna go as far back into the mountains as possible to see what it felt to get lost.…” So they simply headed straight out into the Grand Tetons to feel what being lost might be like.

This scene was inspired by the joy of sitting around the campfire and telling stories with the stars above. On their trip to Oregon, there was a particular night where they found themselves telling stories to each other in the dark.

The river is an important character in the film, too, so they had to experience the rapids for themselves. Sanjay Bakshi said, “…we took the effects guys out on this because they have to really capture the river, and try to capture the energy and our love for the river, and being swept away for miles and miles away from home. So that was a trip we took, and Denise, Pete and I were in the same boat and there were some serious rapids.”

Can you imagine a better job?!!

That’s all for now, I will have more about the film and Pixar in future posts, but I wanted to leave you with this trailer from The Good Dinosaur, enjoy! (If you are reading this post via email and cannot see the video, just click on the title of this post at the top of your email to see it on the blog, thanks!)

This is not a compensated post; however, food, lodging and transportation were provided.