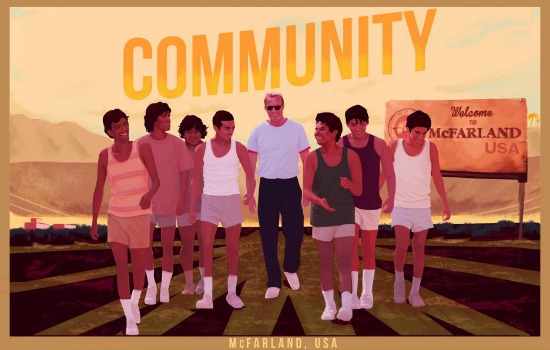 Hi everyone! Right before interviewing Kevin Costner (see that here), we had the great privilege of interviewing the real life inspirations behind the new Disney film, McFarland, USA, Coach Jim White and the Diaz brothers, David, Damacio and Danny. They were so charming, and funny, and honest. They appeared happy to be with us, and they enjoyed sharing their behind the scenes stories about the movie and what’s going on in their lives now.

I felt very humbled in their presence. Humbled, I guess, by everything they’ve accomplished and the power of both their belief in themselves and their hard work. The conversation flowed easily, so when the 25 minutes were gone I was wishing we had had another hour to chat. I hope you enjoy these excerpts from our conversation: 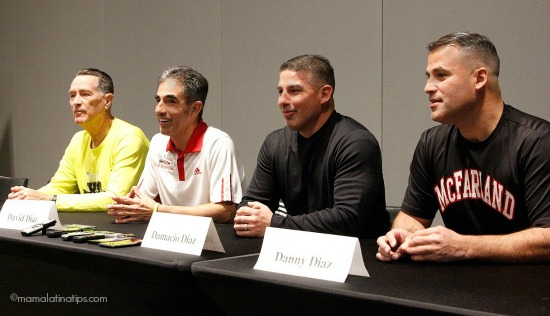 Coach White about getting the movie made–

“…It was about a 15-year process for us, my wife and I. We signed with this one company. …Two years later, we signed with another one, not quite that often, but, …it took a long process….we were thrilled …that Disney had it, because then we knew that it shouldn’t have any sex and…cussing and cigarettes and this type of thing, you know…We were very happy…”

“Yeah, we’re very, very proud of the way the movie portrayed us, our family. We were raised in the field, it was…our life. We started picking and hoeing and raking and doing everything you could possibly think of. We were about seven or eight years old when all that began, so for us, it was a way of life.”

Jim White said that the only one who had some doubts was the brothers’ mother, she told them,”I love the film, but they didn’t make me strict enough.”

“You know, growing up in McFarland, we didn’t have much. There’s nothing to do in McFarland. when we were growing up, maybe seven, eight, nine, ten thousand people is the population. It’s grown a little bit in the last two, three years, but not much has changed. It’s a poor community. you’re driving on 99, the freeway, and you blink… you’ll miss it…. We don’t have the big malls. And we don’t have…the big grocery stores…But, if it weren’t for sports…our kids would be lost, because it’s either… education and sports or the streets. And those…are the two extremes and those are the two options… for our community. Right now our community is…excited…obviously with the movie and rightfully so.”

“…Let me add a little bit… I see a definite change. We have changed our city logo. We are no longer the Heartbeat of Agriculture. Now we are a runner running through the field, a figure — silhouette of a runner. And underneath,  Tradition, Unity, and Excellence. So, that’s a big change.”

“We have kids that are in high school and some that are…in elementary school. And so, I can’t keep up with my kids in high school , but I go by a little seven-year-old. We run…you know, three, four, five miles a day just to stay in shape. 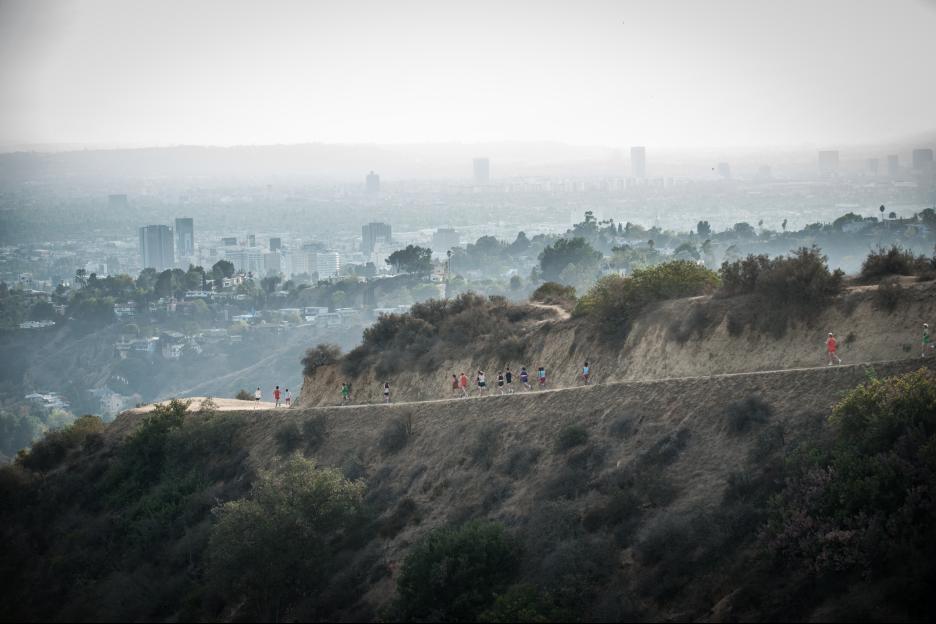 Sitting in the room I could feel the huge impact they had had on each others’ lives. We could see the camaraderie and their great respect and love for each other–

“We are…God-fearing folks, so we were…teaching in Sunday school, … and we were part of the Royal Rangers and so — we did that on Tuesday nights, at our local church, but, yeah…, Mr. White was there…as a person that we can rely on. And, and believe it or not, before he was a coach, a scientist. He…was a fifth grade teacher and before he was a P.E. teacher. And so, …he’s a very knowledgeable guy when it comes — you pick up any type of bug or any type of leaf, he knows what it is. And we try to trip him up on that, and he’s very, very, …smart in that regard. Um, he’s a pretty good coach, too.”

Most of them became coaches or teachers of some sort–

“... a fifth of the folks in high school ended up, especially,… folks of our color and our culture, …maybe started school,…but hardly any of us finished. So, it was a big, big deal for us.”

“Mr.Diaz, their dad, Paul, he pushed education real hard, too…He told me… I want them to get their education, so I will go back and get my education, and he did. He went back and got it.”

Regarding the influence of sports in their lives–

“We were already tough kids and we were…used to working hard and…they’re seven of us in our family. We’re all a year apart. David’s the oldest and he was a bully. He would beat us up all the time.  But he encouraged us to play sports. Matter of fact, he ordered us and he forced us and he made us play sports, because… it taught you discipline…. it gave you character. It taught you how to accept losing or winning. And so, that was something that we did since we were third, fourth, fifth graders and by the time we got to college and we’re now training…and running and living our lives with Mr. White” 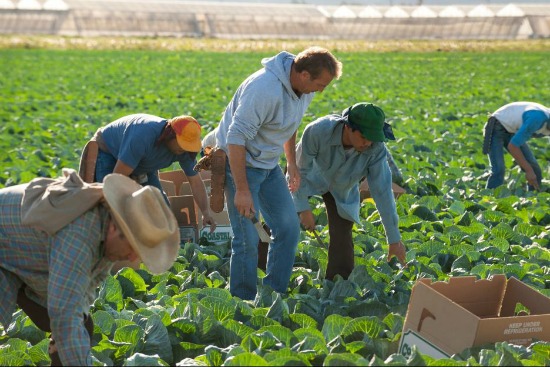 Coach Jim White was such a part big of their lives that he even was a “picker” quite often, this is what he said:

“…I’ve done it quite often. I didn’t enjoy it very much. …we didn’t do cabbage . We didn’t have that close to us. That was the only thing really that they had…available to show that type of work….It’s grapes and it’s oranges and it’s almonds and it’s cotton and stuff in our area, but those weren’t available. …That was a real good… part of the movie though.”

Thanks, truly, to Coach White and the Diaz brothers for taking the time to talk to us.

McFarland, USA, opens this Friday, February 20. I loved it and hope to see it again soon,

Hello Silvia,
My name is Andrea Lorente, I am contacting you on behalf of AgSafe. We are a non-profit organization that is dedicated to providing safety education and resources to farm workers. We have an annual safety conference that inspires and educates ag workers and would love to get in contact with the McFarland Team about speaking at our conference. Their spirit, energy and experience is exactly what we are about. If you could reply to me privately and let me know if you can facilitate the contact I would greatly appreciate it. Thank you Silvia!
Best Regards,
Andrea Lorente

I am a Spanish AP teacher in deep south Texas, Las Milpas. About 5 minutes away from the Mexican border. Las Milpas is very similar to Mcfarland my students have almost the same challenges the Diaz brother had to prevail. They come from very low income families some who have to cross the Mexican border everyday to attend school.We currently watched the movie McFarland and my students would really love to write a reflection to coach White and the Diaz brothers.
Is there anyway you could provide me some form of contact with a representative or anyone who would be able to receive these letters and perhaps deliver them to either coach White or the Diaz brothers. I know a simple letter like this would make a big difference in their future.

Thank you for your time

Hola Maestra Villareal, thanks for your comment, and thanks for doing this with your students. I will find out how you can get the letter to them and I will contact you via email. Saludos!

I’d love to send a book of mine to the Diaz brothers and Coach White and for the community as well (library, etc.) Can you get me in contact with them or let me know where to send the books? Thanks!

Loved the movie and loved the interviews! Gracias!

Hi Daniel, thanks for you comment, I will find out and let you know through email. Saludos!

I’d love to send a book of mine to the Diaz brothers and Coach White and for the community as well (library, etc.) Can you get me in contact with them or let me know where to send the books? Thanks!

Loved the movie and loved the interviews! Gracias!