Saturday, February 7, 2015, a day I will never forget. I had the chance to interview one of my favorite actors, Kevin Costner and I remember being a little nervous, not just for the interview, but because I was asked to be photographer for the group.

We were a group of 25 dad and mom bloggers very excited to talk to him about his performance as Coach Jim White in the wonderful new Disney film McFarland, USA. It opens in theaters February 20th and we had a chance to pre-screen it just a couple of days before the interview. McFarland USA is a beautiful film about real people who work very hard and discover anything is possible when they believe in themselves.

When he walked into the room, it was very surreal for me, he’s a true favorite. He looked at ease, he sat down and made a quick joke about being alone (without other members of the cast) in a room full of parents.

Very quickly he made us feel comfortable and the questions started flying, we had just 25 minutes with him so we had to take advantage of it. Here are a few excerpts from the interview, enjoy! 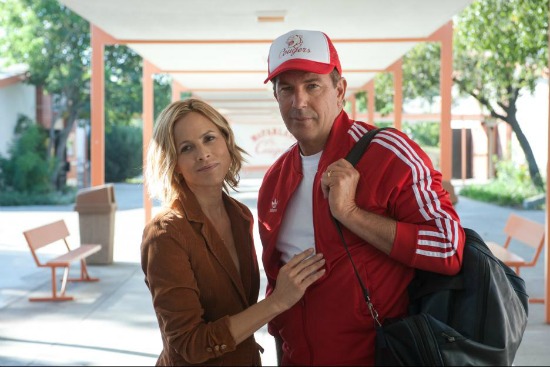 About His Life and the film McFarland USA


So what was the most rewarding part about making this movie?

” …I’ll tell you, I’ve had such a journey in the business….when I found movies…to me it was like recess. You know, I wasn’t very good in school but when that bell went and I could go out and play and make up my own life and do whatever I wanted to do, that’s what I kind of wanted in life. Now that may sound like Peter Pan but that’s what I wanted.

I wanted to be absolutely interested in everything that I did. And… that began to happen for me. And… so as I conduct my career going forward, …it’s obviously more than just movies. Movies are a small part of my life. They’re an important part. They’re the tip of the iceberg that the rest of the world sees, but they’re a very small part of my life.

And the rewarding part of something like McFarland is that, you know, I don’t plan my life so much to the point that I miss something like McFarland, a little story about Latinos … and a community that I actually participated against in high school. I played against McFarland in baseball. … I lived in Visalia, up in the central valley, so the important thing for me was that I was able to participate in this movie and highlight… a culture that we see all the time, driving down our highways, looking off to the left and right, and somehow we just keep driving, right? We’re not supposed to text and we’re not supposed to stop our car to look. But that is how the food gets to us.

And movies have been a joy for me. And so one that would highlight…this little town, and there’s little McFarland’s everywhere in America, … I like that. …For me it’s a very important part of my filmography to be a part of this movie.” 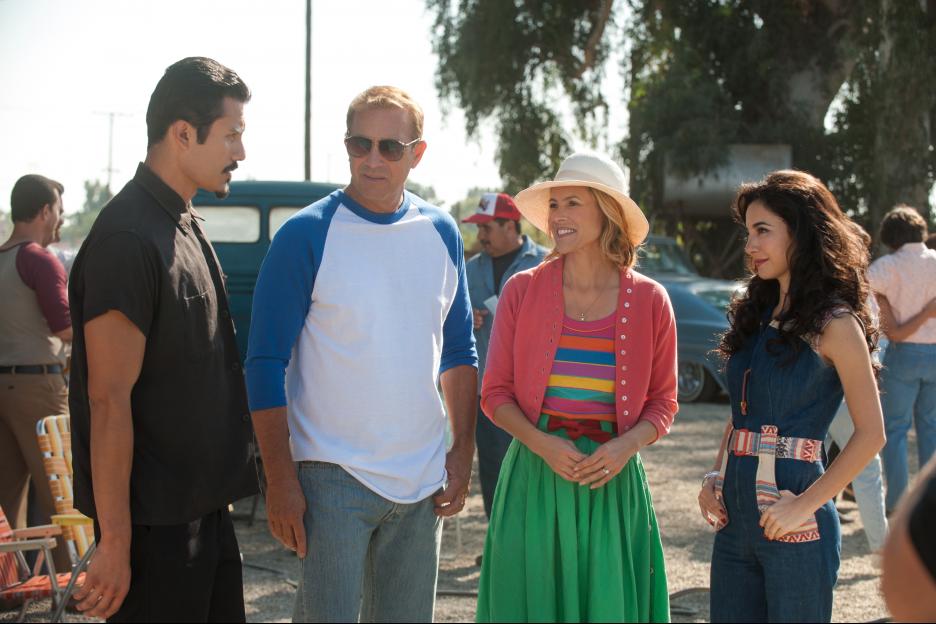 What was the most emotional part of the movie for you?

“The most emotional part? Um, you know, the movie was filled with a lot, so to drill down on a single moment, but the important — one of the highlights of the movie is…where it’s supposed to be. It’s before the last race. They’ve gone from not knowing anything about what was possible to sensing that everything was suddenly possible, and what happened? They found themselves in the last race, and they saw the buses drive up that were bigger than their bus, shinier.

They saw kids come out of the buses in uniforms that were better. The kids were bigger. So all of a sudden they started to shrink back. They started to go back in their minds to McFarland. They suddenly weren’t gonna be able to maybe compete at this level. And that’s where men, older men and, and older woman will always be at their most useful, to look at them and see the fear in somebody’s eyes, the doubt in somebody’s eyes and to say no, you belong here.”

“When you make someone feel like they belong, uh, they start to feel like giants. And what happened? They won. And they continued to win, and it was all because somebody said it’s possible if you’re willing to work at it. So an emotional thing for me always is, I hope somebody talks to my sons or daughters that way should I not be around, about what’s possible.

And I think that’s what we all, you know, want for even ourselves,… but more importantly we always want it for our children. So that was the most emotional.”

About Training for the Film…or Not

So what kind of training did you have to do for the film?

“Training? I hate running and so that’s why I enjoyed being the coach. One time I ran with them, and as you see in the movie, I quit. I played the coach part really well. I sat down and had a Coca Cola. And, um, I didn’t have to train for this really. It was pretty spelled out for me in the script, what I would do, which was, it was a sport I was unfamiliar with.

And it was one I would try to have to educate myself with. It was one I would have to coach without facilities, that probably the schools we would be competing against had. So I had to try to be resourceful, and the script gave me those opportunities to be that. …So there was not really any training involved for me. There was just…being heavily involved in these young men’s lives…

There was so much more about the movie than the finish line. The finish line’s for them. You can give young people something to shoot for and what we realize watching this movie is that when we do, they can somehow exceed beyond their own expectations. So we realize that’s actually in front of all our children. And if you really want to get specific about it, it’s actually in front of us, too. Uh, wherever you’re at in your life, you know, there is a chance to do something else in your life. We’re not done.

You know, we’re not done at all, …we’re here, you’re doing your job but what you want to be in your life is still in front of you. The same things that we offer our children, we shouldn’t be so ignorant to not offer up to ourselves.”

About Playing in Sports Movies

What is it about sports films that you find so appealing?

“Well there’s a lot of sports films that come to me that I never do because they’re not very appealing. They maybe are too much about sports or they’re too obvious or they’re too whatever. …When I run into one, they always, you know, the best ones are about people, obviously,…and there’s less sports in it than you would imagine. ….The ones that try to make a wall-to-wall sports movie might as well make a documentary or watch that on ESPN.

Uh, it’s really, we always are wanting to see ourselves in the movies. …I think that… if you saw yourself as being Maria Bello, you know, you saw how honest her portrayal was of being shipped around because of her husband into a community that maybe didn’t look like it was gonna be so much fun. But, you know, the women in our lives… are … the ones that kind of almost make everything possible to come home to.”

About His Relationship with the Boys in the Film

“I didn’t try to be. I think that, you know, you understand that I’m in that position where that could happen, so it’s better to let that happen than to just go in and, and be Yoda and be able to… have all this stuff that you can tell them. It’s more…authentic when they actually come to you, you know, and you’re not just spouting off. You know, nothing was off limits when they would come to me to talk… And they began to understand that, and I think hopefully appreciate that.

And it was important for me, for them to be good. It was important for me to let them know that they needed to be even more prepared for Niki, …that’s who gave them a big shot in their life. And they… owe it to be as prepared as they can, every day. And so I would talk to them a lot about… professionalism, about…what you do, because there’s plenty of fun, right?

Suddenly they’re not, you know, suddenly the bell rang for them too, right? It’s recess. They’re out playing too, and they’re getting paid for it. You can get carried away with that and forget that you have a job. And so we talked about that. And then the more comfortable they began, they wanted to know about all the girls I kissed. And, uh, of course I told them if you want to keep kissing girls, the best way to do that is to not talk about it.”

Other projects: the film, Black or White


“I made it for you and I don’t mean that..in a trivial sense at all. I made that movie for you because we’re living in this time where we don’t understand how to talk with each other, and things get said in that movie that are…things that I think after you watch that movie, that you’ll wish you would’ve said…and that, you know, tries to inform. So I do hope that you go see Black or White….”

I believe your daughter sings in that movie.

“My daughter does sing in that movie. She’s the most beautiful little 28-year-old you’ll ever imagine. I was thrilled to…have her. But no, I was very proud of that movie about what gets said. You know, it helps us to go forward, certain movies …., a movie like McFarland is the same thing. We kind of see a reflection of ourselves and this community and these young people. And, …we were talking about partnership, and my wife, when no one wanted to make Black or White, … I said I’m gonna use my own money to make it, ‘cause I feel like, I feel like people will feel like I feel like … after they see it…”

Thanks to Kevin Costner for your time and generous spirit.

I loved this film and I want to see it over and over again. Don’t forget to add it to your calendar. McFarland USA premiers this Friday, February 20th, nationwide. Go to the movies, bring tissue! Here is the trailer:

The movie was wonderful, a see again and again one!!!!
At the end, they showed what each boy is doing now…I think it was so emotional it was hard to keep up, where can I find out this information!!!
What a wonderful change of lives because someone cared and spend the time with them!!!!
Pat