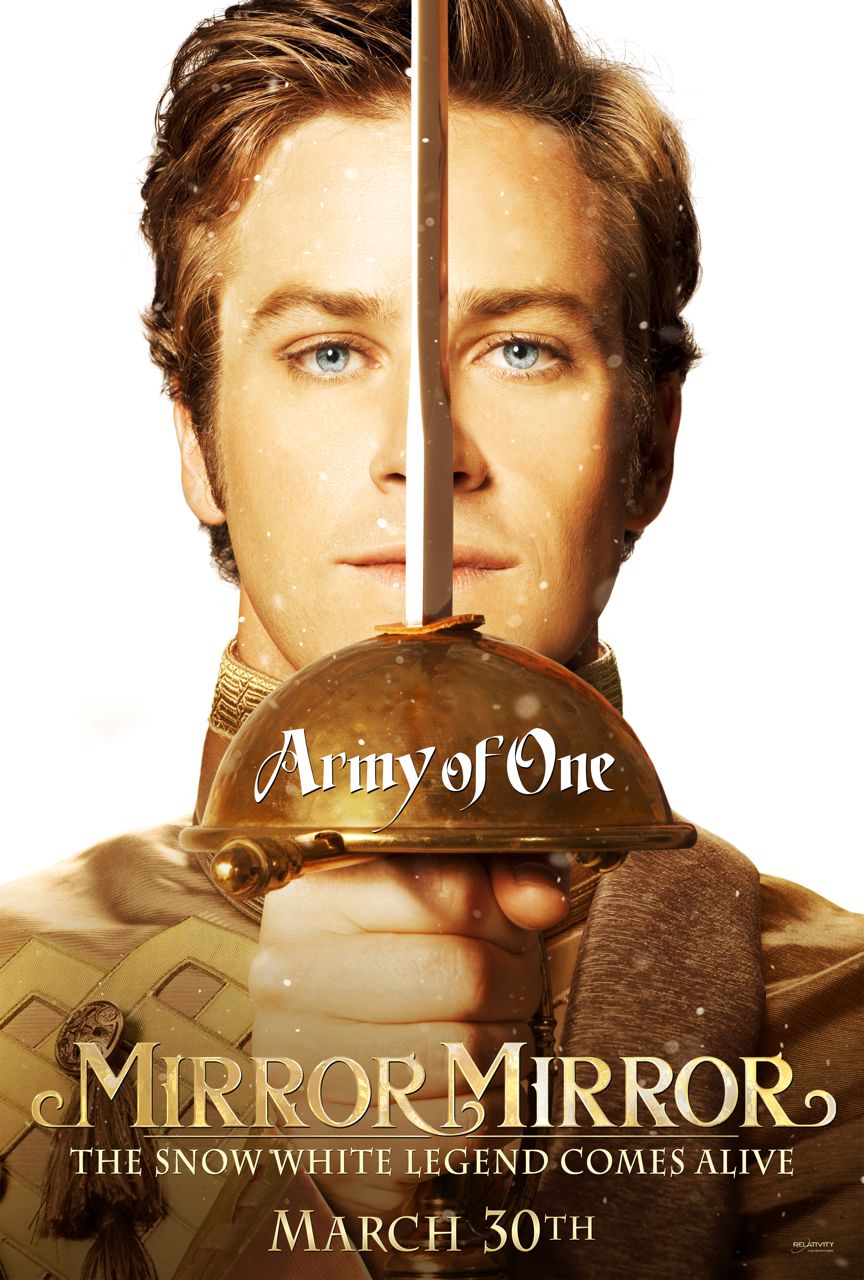 The charming prince from Mirror Mirror, the charismatic Armie Hammer, talked to us about his new character, love at first sight, and working with Julia Roberts and Lily Collins, among other things.  We had a great chat, here is some of it, enjoy!

When Prince Alcott sees Snow , it’s love at first sight.  Do you believe in that personally?  And what kind of advice would you offer young people who believe they’ve met the one?

Armie Hammer:  I do believe in love at first sight, but I wouldn’t have if I didn’t experience it. When I first met my wife, I remember everything she was wearing the first time I saw her.  And that was almost six years ago at this point.

So, I do believe in love at first sight, and I think that’s something that I recognized in the script.  And so, it’s like, “I feel like I can bring some truth to that.  I have actually been through that.  Lucky me.”

I would say for young people who think they’ve found the one, it’s a commitment.  If you think you’ve found the one and you’re willing to really knuckle down and say, “You know what?  I’m not sure what’s going to be happening in 20 years, but I’m willing to work on this for that long of a period.”  30 years, 50 years, 60 years, 70 years, whatever it is, it’s a serious commitment.  And if you think you’re ready to make it, I say don’t take it lightly but do it.  It’s the greatest thing that ever happened to me.

What can you tell us about what it was like to work with not just one but two intelligent and beautiful actresses, Julia Roberts and Lily Collins?

Armie Hammer: It was a treat.  It was amazing. I consider myself very fortunate to get to work with Julia and Lily, like you said, both very intelligent actresses.  And especially seeing Julia, who has gotten to do this for a longer period of time than either of us, Lily or myself, to get to watch her and see how the experience has sort of accumulated. Also, to see how much she knows about this business, and to say, “Wow, I hope that when I’ve been doing this 10 years that I’ve accumulated 10 years worth of knowledge.”

It’s really interesting watching her work and watching Tarsem (the director) work and getting to use them as role models and think, “Wow, I’d like to get that good one day.”

What do you think that boys and young men could learn from the message of the movie?
Armie Hammer:  I think that for little boys, if you want to look at the Prince Alcott role, this guy was living in a kingdom.  He had it all made.  He had it all easy for him if he just went down this certain path.

What was your favorite scene in the movie and why?

Armie Hammer:  My favorite scene probably to film was all the sword-fighting scenes. There were several really great sword-fighting scenes, including one really long one I had with Lily and then also one where I fought seven people at the same time.  There’s a lot of exciting swordplay happening and a lot of fun training leading up to it.

What would you say to kids, why do they need to go and watch Mirror Mirror?

Armie Hammer:  What else are they going to watch? I would say kids should go watch Mirror Mirror because the more successful the movie is, the more likely there is a chance of getting more good kids’ movies out there.  This is great family entertainment and they don’t make a lot of movies like that.

So, it’s nice that there’s something that you can go with your grandparents to and not be embarrassed at any point. Go enjoy a good, fun movie…or else.

Thank you for your time Mr. Hammer.

Don’t you just love his answer about love at first sight?!

If you missed them, make sure to check out our chat with Lily Collins and the amazing wardrobe from Mirror Mirror.

Remember Mirror Mirror (Rated PG) opens this Friday, March 30th.  You can follow all the news on the official website, on  Facebook, and Pinterest for behind the scenes photos and more!   Here is the official synopsis and don´t forget to check the clip at the end of the article.

One of the most beloved stories of all time is coming to life in the motion picture event for the whole family, Mirror Mirror.  A fresh and funny retelling of the Snow White legend, Mirror Mirror features breakout star Lily Collins (The Blind Side) as Snow White, a princess in exile, and Oscar®-winner Julia Roberts as the evil Queen who ruthlessly rules her captured kingdom. Seven courageous rebel dwarfs join forces with Snow White as she fights to reclaim her birthright and win her Prince in this magical comedy filled with jealousy, romance, and betrayal that will capture the hearts and imaginations of audiences the world over.  The film also stars Armie Hammer (The Social Network) as the Prince, and Nathan Lane (The Birdcage) as the hapless and bungling servant to the Queen.

Disclosure: I participated in a Blogger Event hosted by Relativity Media.  As always my opinions, comments, and love for movies are my own.