As we count down the final days to the premiere of Rogue One: A Star Wars Story, I have the pleasure of introducing Donnie Yen, who plays Chirrut Imwe, a blind warrior-monk and, in Yen’s words, a Force believer in Rogue One: A Star Wars Story. Before this weekend, Donnie Yen may not be well known to the US general public, but he’s a huge star in Asia and to martial arts movie fans everywhere.

RELATED POSTS: Read my interview with Felicity Jones and participate in the Rogue One giveaway for a chance to win fabulous prizes.

Yen has worked on 70 movies and my niece and millions of others are already huge fans of his Ip Man series. I’m guessing he will have millions more fans soon.

An Exclusive Interview with Donnie Yen

We asked him to tell us a little bit about his character. Donnie shared, “I play Chirrut, he’s blind, he’s spiritual. He’s the spiritual center of the team. He’s the Force believer. He also has a sense of humor, yeah, and he beats up all the Storm Troopers.”

Yes, he does! While visiting Skywalker Ranch a week ago I previewed 30 minutes of the film, and Chirrut’s entrance is memorable!

Yen shared that when Director Gareth Edwards and he discussed the character, he felt it would be so much cooler to make him less cliché. He wanted to give him a little bit of vulnerability and a sense of humor. Gareth agreed and Disney loved the idea. But Donnie confessed that he underestimated the difficulty of it. He said:

“ never played a blind person before. That was another reason why I wanted to do something completely different, challenging.

But it was really challenging. Having contact lenses looks interesting, but having to take them off every three hours and let them rest because they irritated eyes, and every ten minutes I needed drops. It bothered me.

And you can’t really see. Everything was blurry….they still haven’t managed to make a blue pair of contact lenses… having that specific look and giving full clarity of sight.  So I was having difficulty measuring the distance… but more difficult was, I couldn’t look…my fellow actors in their eyes…. hen…talking I had to look at a point.  And that was very, very frustrating.

So I was trying to fine-tun my acting, every single day. I was quite frustrated, it was kind of like you feel like you, but you’re not in control of yourself… So that was quite difficult.”

However, he also said that having these difficulties and being blind really helped him to play the role in a way he didn’t expect.

Donnie shared the story of how he got the role:

“My agent called me and…said, ‘Disney want you to be in Star Wars.’  Then Gareth called me. I felt Gareth really felt I ha the persona for portraying this character in his mind and that was the answer I was looking for as an actor. But, I know it sounds crazy, but in the very beginning I was hesitant on board. I didn’t want to leave my family and kids. I just got off from another movie and I said ‘I don’t know.’

And then all the family members and friends and all the fan voices came out of nowhere and , “Oh! You gotta be in Star Wars!’  I realized then I’m making history here, you know? So I’m so glad.”

And we’re glad he said yes, too. 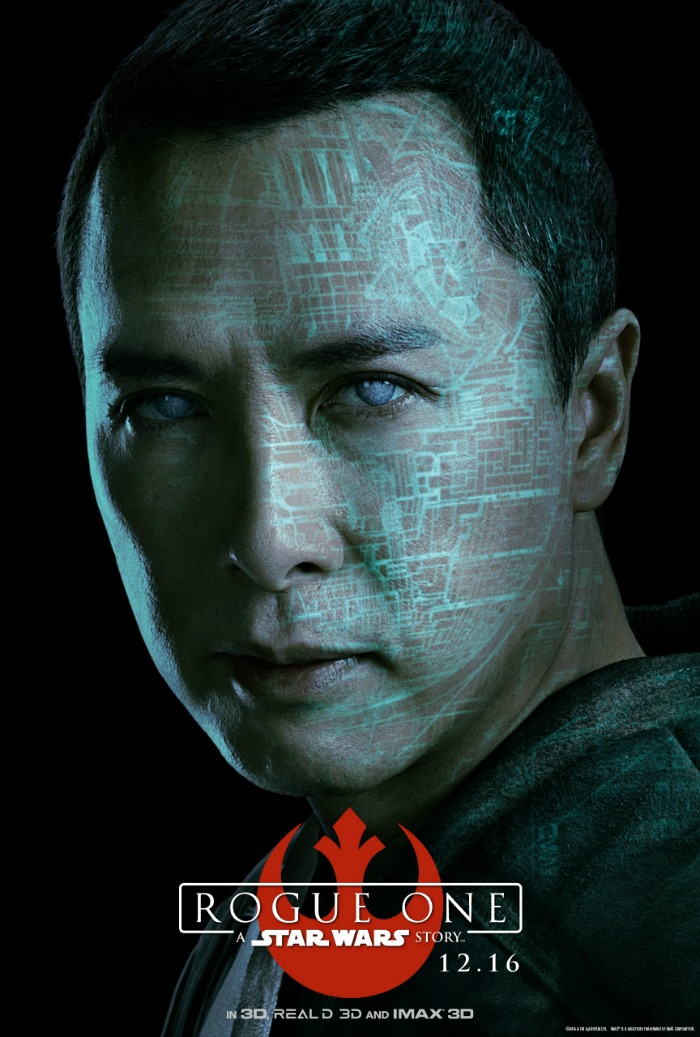 Thank you Donnie, it was a pleasure meeting you.

And don’t miss the premiere this December 16th, 2016. Here is the latest trailer: