My dad took me to see Star Wars when I was a girl. I just couldn’t believe what I was seeing. I’d never seen anything like it and I absolutely loved it! That’s why last weekend was so exciting for me, even surreal. I never imagined in my wildest dreams that one day I would visit Skywalker Ranch and LucasFilm, where all the magic started, and that I would be interviewing members of the cast as well as the director of the newest movie in the Star Wars Universe, Rogue One: A Star Wars Story.

In the following days, I’ll share my experiences and interviews from my visit with you as we anticipate the premiere of Rogue One: A Star Wars Story on December 16, 2016.

I first saw Felicity Jones walking by me in the lobby of LucasFilm. She was wearing an almost ethereal dress and she looked amazing! It was a contrast to Jyn Arso, her strong rebel character in Rogue One.

A little later she walked into the room where 24 other bloggers and I were waiting to talk to her about the film. The following are excerpts from our interview.

She arrived smiling, joking and with a funny little doll in her hands. She said, “I’ve been given a really scary Jyn doll.” She mentioned that it was made especially for her with many arms so she could give it to her one and a half year old nephew who likes to pull arms out of dolls.

Who is Jyn Arso?

We jumped into the questions immediately and we asked her to tell us a little bit about her character. This is what she said (gently edited for ease of reading):

“Jyn has a very strong ideology. She hates the empire, she hates everything they stand for, they have destroyed her family. At the same time she has a wonderful humanity and she learns how to be a leader throughout the film.  She starts off, and she’s a bit of an outsider and she is very suspicious and untrusting of people.

She’s had a bit of a hard life, there’s been quite a lot of struggle, so it’s not easy for her to trust people. Throughout the film, you see her actually forming these kindred spirits with the other rebels. And finding something that they all have in common, dislike of the empire, and they unite over that despite their differences.“

About getting the role

Felicity says she got a phone call from Director Gareth Edwards to offer her the role. She says she kind of knew she had gotten the part, because her agent, a very good friend of hers said, “I’m pretty sure it’s yours, but when Gareth calls you, make sure you sound really surprised.“

After the call, Felicity said that the first thing she thought was that there will be a lot of training involved with the film, so she needed to start going to the gym ASAP.

Relationship with other Members of the Cast

I asked Felicity about her relationship with other members of the cast and what she would be taking with her from the project. She said, “The thing that I would take from this are the friendships. I absolutely love all of them and everyone is very different, and we all have our quirks and our ways but there is a real spirit of collaboration. …I never felt…that there were any huge egos, it felt like everyone was in it together and there was real support.

From working with a group of men you could think that they would be sort of trying to cut you down or sort of compet but I was very lucky, they were very supportive throughout everything.”

Felicity says they were a team both on set and off, and most of the time they were joking and having a good time. Sometimes it took a lot of time for them to focus on a scene because of all the joking around.

About Jyn Being a Model to Other Girls

Definitely, we have seen a progression in the introduction of strong female roles in the Star Wars universe, and Jyn is no exception. Felicity shared with us what she would like girls to take away from watching her character.

“Well, what I like about her is she’s not a princess, she’s not really rich, she’s not privileged you know? …She’s very much an ordinary woman and ordinary girl who’s had to make the best of things….I think what I would like young girls to take from it is resourcefulness and self-reliance. Jyn isn’t always sweetness and light and giggles, but she is exactly who she wants to be.”

“I think that’s what’s important that young girls don’t feel like they have to conform to some idea of what a girl should be.  It’s like you can be whoever you want, whatever you are, and take confidence in that. …here isn’t a standard that we should all be working towards.  This is what perfection is you know. It’s about finding what’s different about us and being allowed to that come through.” 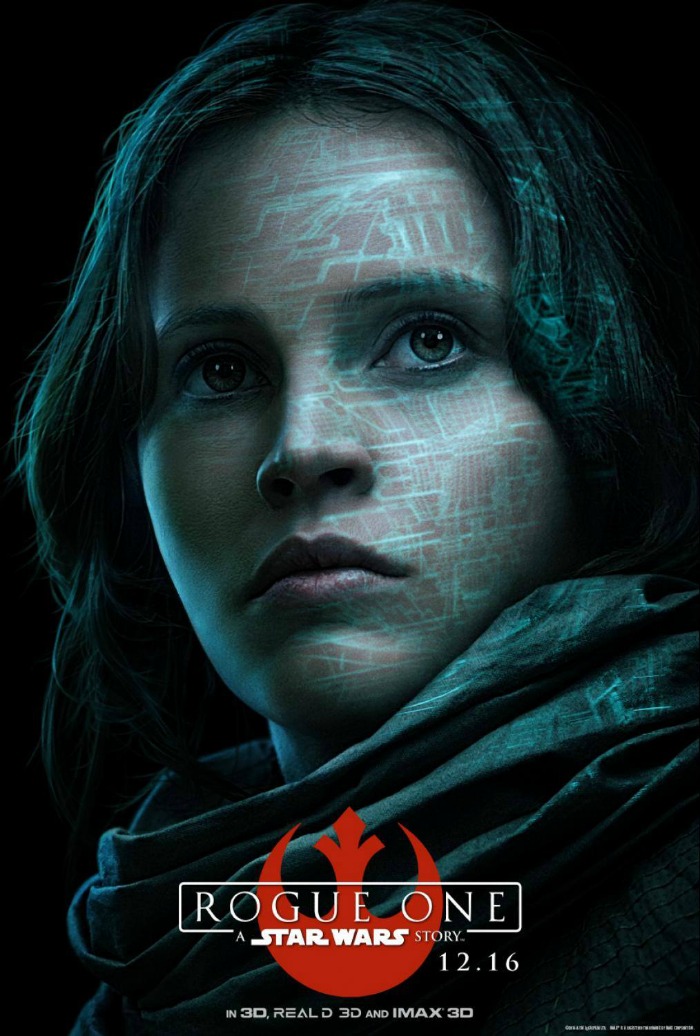 At the end of the interview Felicity shared with us the most difficult thing about being a part of Star Wars for her, “I think sometimes it comes with a lot of pressure, and obviously you know Star Wars is the boss. It’s not any individual or any one person, it’s the whole franchise and I think it’s the responsibility . …ot letting that kind of become too much and get too sort of overly serious……not kind of beat yourself up too much for all the mistakes that you might be making.“

Thanks, Felicity, for your time and your kindness, it was a real pleasure meeting you.

Remember, Rogue One: A Star Wars Story, premieres on December 16th, 2016. Do you have your tickets yet? I do! Enjoy the featurette below! (If you are reading this post in an email and can’t see the video, just click on the title of this post in your email to go to the blog to see it, thanks!)