Just before the new hit Disney/Pixar film, Inside Out, began crushing box offices, I had a chance to sit down, along with a group of other bloggers, for an interview with actor, Kyle MacLachlan, who provided the voice for Riley’s father in the film.

A father himself to soon-to-be 7 year old Callum, Kyle admits being a Dad plays a role when considering new work. “Definitely I think... it’s added another dimension of consideration…How is this gonna affect my family, both in my being around or not being around, and also just is it something that I’m comfortable putting out there?  Do I want to carry whatever remnants of that work environment back home with me?…”


If you’ve not yet had the chance to see the film, it centers around an only child, Riley, and her mom and dad, who move from Minnesota to San Francisco. Most of the film’s action takes place inside the mind of Riley, an 11 year old girl, and we follow most of the story from the perspective of her emotions, personified in the characters Joy, Sadness, Anger, Fear, and Disgust.

When asked which of these characters, Joy, Fear, Anger, Sadness, or Disgust, he would choose to babysit his son, he began his answer as a father, but finished as both an actor and a father, “Which babysitter? …well the Protective Dad Fear because that would keep him from doing anything, but then he wouldn’t experience everything that I would want him to experience, so… I think Joy. I think kids are pretty resilient, you know, and if they got into trouble, they’d figure a way out...”

There’s a funny bit in the film involving pizza, I’ll leave it at that in case you haven’t seen it, but it’s enough to understand why one interviewer asked Kyle, what’s the strangest thing had on pizza?

Here’s what he said, “Well, two part answer. I like the Canadian Bacon Pineapple topping. But the more interesting answer, when I was in a Marine Biology Camp, 8th Grade maybe, 9th Grade, 14, 15, … we had to make dinner, our own dinner based on the ingredients we found in water. So whatever we found in tide pools or in the water, we could catch, we had to make dinner … And so we made pizza with a variety of different mollusks and things on top of the pizza and it was–we had to chew things that I didn’t really know what they were.”

And in a way, that answer really sums up why I appreciate Kyle MacLachlan’s work so much, and have done for such a long time. He brings that same joy of life and adventurous spirit to his characters, the same kind you would need to eat a pizza like that. And it makes me feel I’m willing to follow him into deep, murky waters, like even those of the mind of an 11 year old girl. 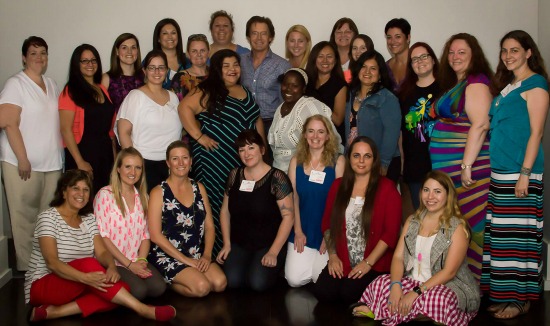 Thanks to the Walt Disney Studios for the invitation, lodging, and transportation to the event. All comments, opinions and my love for Pixar movies are my own.