Tres leches cakes is my favorite. Not just because it’s delicious, but because it brings back wonderful memories of my college years. My friends and I used to go to “tomar el café” at a very popular place in Guanajuato called Truco 7. Café capuccino and tres leches cake were our obsessions. Truco 7 is a magical place, but more on that another time. 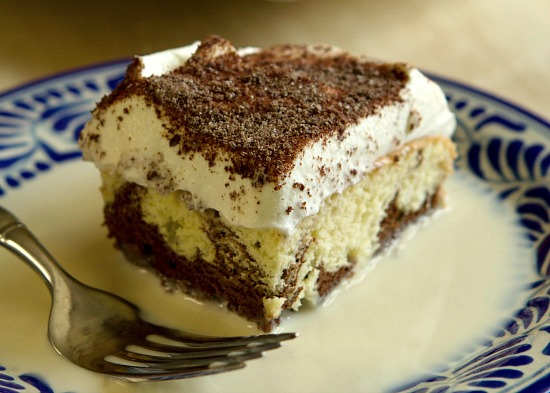 I’ve made tres leches cake many times (you can see my recipe here), it is always a crowd-pleaser. But today I would like to share another version with you. I wish I could say this recipe were mine, but it’s not. This comes from the very talented Chef Pati Jinich, host of Pati’s Mexican Kitchen on PBS. Here it is:

Recipe and photos published with permission. 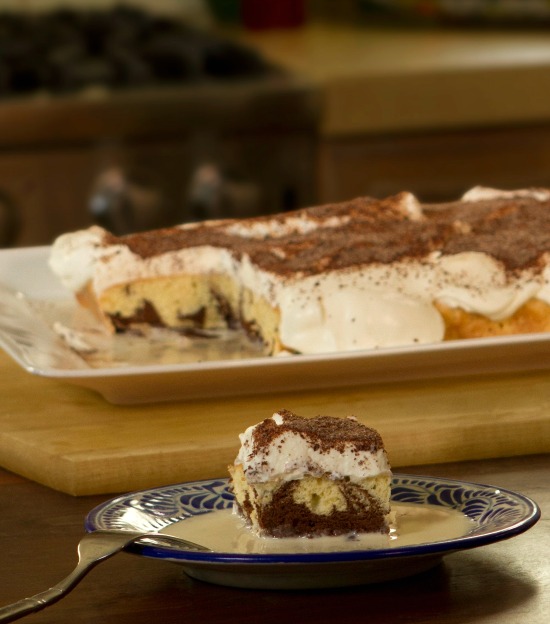 You will also need unsalted butter, to butter the pan, parchment paper, and a 9 x 13-inch baking pan.

Preheat the oven to 350° F with a rack in the middle. Butter a 9×13-inch baking pan and line the bottom with a piece of parchment paper.

In a stand mixer fitted with the whisk attachment, beat the egg whites on medium-high speed until they hold soft peaks, about 4 to 5 minutes. Reduce the speed to medium and slowly add the sugar, beating until the whites hold stiff, shiny peaks. Transfer to a large bowl and set aside.

Pour the egg yolks into another large bowl and beat with a whisk or fork, until fluffy and pale yellow. Add the vanilla and continue beating until fully incorporated. Gently fold the egg yolk mixture into the egg white mixture with a rubber spatula, taking care not to deflate the whites. Fold in the flour 1/4 cup at a time and mix well. The batter will look a bit streaky.

In a small bowl, combine the hot water with the cocoa powder. Pour half the cake batter into another bowl and fold in the cocoa-water mixture with a rubber spatula until thoroughly mixed.

Spread the vanilla batter in the prepared pan. Pour the chocolate batter on top, in a straight line down the center. With a knife or spoon, make a whirling design from one side of the pan to the other. Bake for 22 to 25 minutes, until the top of the cake has lightly browned and feels spongy to the touch. Remove from the oven and let cool.

Invert the cake onto a large plate or board and remove the pan and parchment paper. Cover the cake with an upside-down platter large enough to hold the cake and the vanilla sauce and invert again so the cake is right side up. Using a fork, poke holes all over the top of the cake, so it will absorb the sauce.

To make the sauce: In a large bowl, combine the three milks and vanilla and stir to blend well. Pour about 2/3 of the sauce over the cake. Don’t worry if it looks like there is too much sauce—the cake will absorb it. Cover and refrigerate for at least 2 hours or overnight. Reserve the remaining vanilla sauce.

When you are ready to finish the cake, remove the cake from the refrigerator and spoon the remaining sauce on top of the cake.

Make the whipped cream: In a stand mixer fitted with the whisk attachment, whip the cream and the confectioners’ sugar on medium speed until it holds well formed peaks, about 6 minutes. Spread the whipped cream over the top and sides of the cake. Garnish with the grated Abuelita chocolate.

“Mama Latina Tips is a participant in the Amazon Services LLC Associates Program, an affiliate advertising program designed to provide a means for sites to earn advertising fees by advertising and linking to amazon.com.”
Scroll back to top
19shares