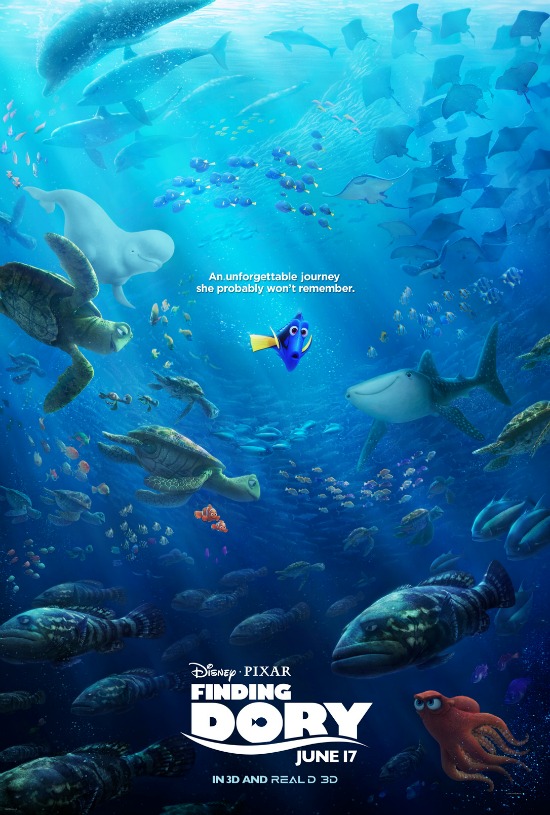 Finding Dory swims into theaters June 17, 2016. Make a note, you don’t want to miss it. And now get ready, because today I’m going to share 5 fun facts about Finding Dory!

During my recent visit to the Monterey Aquarium, I got to see the real animals that inspired both Disney/Pixar’s Finding Nemo and Finding Dory. I also had the chance to talk to some of the Pixar animators, directors and producers, who made the films, about their work.

Director Andrew Stanton and Producer Lindsey Collins sat down with us in Monterey, California, to give us some insight. Andrew, as you may already know, was also the writer and director of the Pixar classics, A Bug’s Life, Finding Nemo and WALL-E, and he co-wrote all three Toy Story films in addition to Monsters, Inc. Lindsey joined Pixar in 1997 and was the lighting manager on A Bug’s Life, the production manager for Finding Nemo, and a co-producer on WALL-E.

They were both funny and approachable, and you could tell they enjoyed joking around a lot. But one of the things I liked most was hearing how their families, their kids, and their experiences as parents served as inspiration for the movies, their characters, and even the characters’ voices. I’ve no doubt this is one reason I love their films so much, they are authentic and true.

Having said that, let’s get into it!

In his own words:

“I had to review something.  And I had to see it again … And then I started thinking about, wow, you know, — she  didn’t change.  She still has the same view of herself that she did at the beginning of that movie.  And I do think she would get lost there — just as easily. And she would not lose these wonderful people that she’s found in her life.  Which are Marlin and Nemo.  And she’s found this new home… She has emotional memory.  So, I knew she felt these feelings all the time, of loss, but couldn’t place them.  And I hated that that was unaddressed for her.  And, so, that just kept lingering in me… And then I couldn’t drop it, you know?  Tried…” (laughs)

And we are happy that he didn’t drop it! Stanton also told us that he had to closely watch Finding Nemo to find clues about Dory’s past, about what made Dory, well, Dory. He said that he was surprised to see there weren’t many. He was also surprised to see that she said two phrases quite often, “I’m sorry!” and “May I help you?” It was those two phrases that made Andrew and his team wonder, why she say that? what happened in her past?

Writers sometimes have an actor in mind while writing a story. Stanton confessed that he had never done that until he wrote the part of Dory for Finding Nemo. He knew that part was for Ellen Degeneres. Then he said, “I did always wish that if Dory ever did have parents, they would be Diane Keaton and Eugene Levy. They were my dream casting…”  So guess what happened? Diane Keaton and Eugene Levy both said yes to the project immediately.

There is not one scene in the movie without Ellen Degeneres.

Really! Andrew and Lindsey confirmed it and they also shared about Ellen’s professionalism and willingness to do the part.

“…she’s been such a trooper. I mean, given how busy she is…she describes her day and the two of us are like, oh, God!… She doesn’t shoot on Fridays. And, so, she’s like, yep, Fridays are yours.”

Who wouldn’t want Dory (Ellen) in every scene, she’s hilarious!

Marlin and Nemo are back, but you will meet a few new characters, too.

Lindsey told us Marlin and Nemo are in the story throughout, but they get separated at some point. She also reflects a little bit about Marlin:

“…he’s very funny…  …were really excited to be able to get back into it, too. Because, you know, when you spend four years with these characters, you love them. Like you miss them. And, so, when the animators …get back in and get — it’s almost like they get to start talking to them again.”

Some of the new characters in Finding Dory include a beluga whale, otters, and an octopus called Hank. Andrew shared a little bit about Hank “…you’re gonna see more than what you’ve seen… he’s just so gruff. But he’s got… a heart of gold. He’s like your grumpy uncle. Or your grandpa. You just love putting him in uncomfortable situations and seeing him have to …deal with it.“

See Hank in the trailer…

The first scenes will melt your heart

That is all I can tell you, I know, I know! There is nothing worse than a tease, but in this case it’s worth it. I had the opportunity to see the first scenes of the film plus a little bit from the middle, and I’ll tell you those first scenes are precious. There is one very special moment when the audience will say, “awwww,” and you’ll feel a pinch in your heart.

That’s all for this inside look, but go see Finding Dory in June! Mark your calendars for June 17th and I’ll see you at the movies!