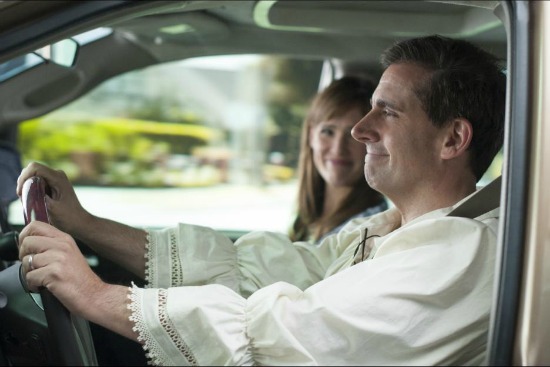 Jennifer Garner plays Kelly Cooper and Steve Carell, Ben Cooper in the comedy family movie, Alexander and the Terrible, Horrible, No Good, Very Bad Day (in theaters October 10), based on the popular book by Judith Viorst.

I had the opportunity to interview them at the Four Seasons, Beverly Hills. Both Jennifer and Steve are hilarious in the film and in person they are funny, warm and sweet, too. I enjoyed listening while they shared their experiences making the film. Here is the interview, enjoy!

How did you end up on this project?

Steve Carell: Um, I was asked to be in it, and I said yes. I just, I liked the script, I thought it was funny, and inventive, and different. I felt like I hadn’t really seen this kind of family movie in awhile. And the fact that Jen was going to do it was a — a huge draw for me, because I’d been a huge fan of hers for a long time… She is the nicest person ever!

Jennifer Garner:  Um, well, he’s fibbing a little bit, because he was actually on it, on this movie, first, so I was the one who knew he was doing it and said “Oh, yeah, we — I’ve been dying to work with him forever.”

Did you ever have a Very Bad Day on set?

Steve Carell: Um. There was one that we kind of point to. There was a scene where we were outside, around the car, talking after the big accident and after the driving test. And it must have been — well, like it’s been the last week here, 105 (degrees) or something. And so that was probably the most arduous day, physically.

Jennifer Garner: You know, I think it was tough because the baby got upset. 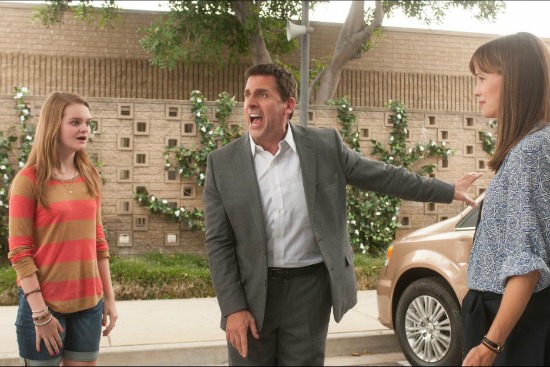 What was your experience working with Dick Van Dyke?

Jennifer Garner:  So exciting. So exciting, I mean, Mary Poppins at my house, is like one of the top three films of all happiness. Times. And so, the fact that I was there with him, was — and I got him to do “Chim Chim Cheree” with me between takes–all so great. He was just funny and warm and lovely, and so accepts his role as being somebody that we’ve all grown up with and an icon in entertainment with such grace. He was really — it was really a great day.

How many takes did you need to make it through without laughing?

Jennifer Garner: I just wanted Steve to think that I was professional…and there were times where I just couldn’t, I could not not laugh with him. I don’t know how anyone — I defy you to be in a scene with him and not laugh.

Steve Carell:  Well, the same. The same from my perspective. The scene. The scene where she’s screaming at the car in front of us. I mean, that’s a side of her I had never seen before, and it was crushing me. It was so, so good.

What is your favorite scene in the movie?

Jennifer Garner: I liked when we were all together.

Steve Carell: That’s what I was gonna say. Like, any — well, we were all together for most of the movie.

Jennifer Garner: A lot. Dancing at the end. It’s just, all of the fun stuff, is really, it’s fun, it looks fun, and it is, and there was a day between scenes where … they were setting up the cameras, and … it was the kind of thing where you would typically go back to your trailers, and do whatever you needed to do…but, instead, they just put us in a little room in the house… And we sat with those kids, and nobody ever looked at their phones, and ..-we just talked. We just, you wouldn’t think that you would have that much to talk about with teenagers, you know, because it seems like they’re from another planet. But these are the coolest group of the smartest, most interesting, engaging kids. And the five of us just hung out together, and had the best time, and that, to me, is kind of the crux of this whole movie, …just that feeling in that room, … Nobody else was there. It was just us as a group. And it was something that we chose to do.

Did you play any pranks on each other?

Steve Carell: I didn’t play pranks. But someone at this table played pranks…

Steve Carell: We went to the same college at different times. So, early on, … before we even started shooting, apparently Jen bought a bunch of Denison University paraphernalia (in).

Jennifer Garner: Everything they made.

Steve Carell:  And… throughout the shoot, like, a Denison cookbook would be in the background on the shelf, or some of the production assistants would be wearing Denison University hats.

Jennifer Garner: Or, truly, the whole crew would be wearing sweatshirts and sweatpants, and he never noticed any of it. It was amazing. It was — I kept going further and further, and everyone would be like, … he’s just totally a man. He’s so oblivious. Right?…At the end, I called Nancy, his wife, and I said — believe I’m not psycho — “Can I stash a Denison chair…with Denison kind of engraved in the back, in your house?”

How long did it take you to see it?

Steve Carell: Like, two weeks. And I — and she could hear me from downstairs.–I started laughing, ’cause it was upstairs in a corner, and I — I had been passing this chair for weeks, and it just registered that it was a Denison University chair, and I — I think I immediately texted you my thanks and “well done.” Kudos on a trick well played. Yeah —

Thanks Jennifer and Steve for the interview, it was a blast!

Don’t forget to see them in action in Alexander and the Terrible, Horrible, No Good, Very Bad Day in theaters, October 10, 2014.

Check out the trailer