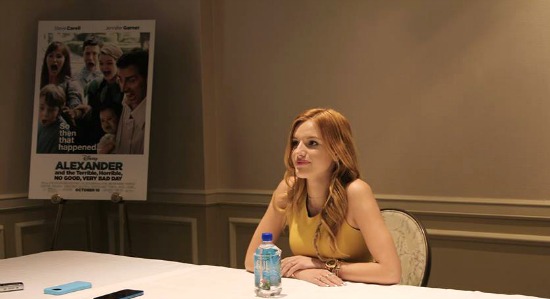 Bella Thorne is the youngest daugher of Tamara and Delancey Reinaldo “Rey” Thorne. She was born in Florida, but currently lives in California. She is a teen actress, singer, model and dancer and has worked on the TV series My Own Worst Enemy and Big Love. She is also known for her work on the Disney Channel original series Shake It Up, and now for her role as “Celia” in the new Disney film, Alexander and the Terrible, Horrible, No Good Very Bad Day, in theaters right now!

A couple of weeks ago I had the wonderful opportunity to interview her. She was friendly and funny, a “down to earth” kind of girl. She talked to us about her character in the movie, some personal stuff, and about her next project.

Some things about Bella Thorne you may not know

Can you describe your character, Celia, in just three words?
Bella: …funny, interesting, — and not so forgiving.

What else can you tell us about her?

What was your favorite scene to film?

It was probably when we were in the car with Steve and everybody’s making those loud noises… it was just so weird and so funny… it was so weird that I’m sitting in a car with Steve Carell and he’s just being ridiculous…I’m the one that’s supposed to be really not laughing, and -Dylan starts laughing… like cracking up… Then Ed. And then comes me laughing…

What was the hardest part of filming this movie for you?

The hardest part about filming this movie is probably the really long hours. …your scene could be 15 seconds ..(but it) took 16 hours to shoot. And maybe — a couple days, 16 hours a day. That’s crazy. It’s crazy to work that many hours and it’s crazy to always be on that many hours. 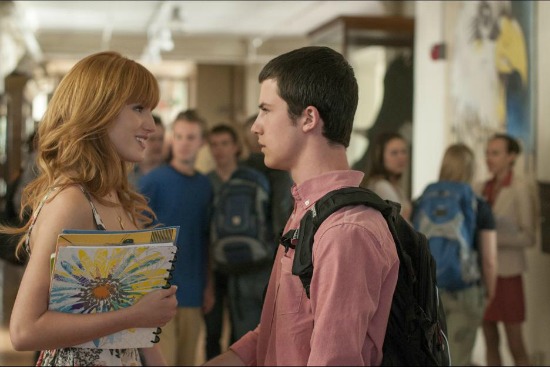 About Her New Project

I’ve got a book series coming out. — Autumn Falls on November 11. It’s very close to my heart… It’s about a girl named Autumn Falls whose father dies and …he leaves her a book. She moves to Florida.

He leaves a journal to write in. She’s like, wow, dad, thanks. Die on me and leave me a journal…What she doesn’t realize is when she writes in the journal, things come to life, but since she’s dyslexic they come to life a little bit wonky, mostly backfiring on her throughout the series. So, that’s what it’s about.

What kind of message would you like to give to teenage girls?

I’m gonna give them a piece of advice that I was given and I wish I would’ve taken it. Growing up, um, on TV — and I really grew up mostly on Shake It Up –I always tried to be perfect for everybody and I wanted everyone to like me. For some reason, I really cared what other people thought so much, and I would do anything to get someone’s stamp of approval. And now that I’m, you know, 17, I really don’t care. I don’t. And I wish I wouldn’t have cared so much, because I changed who I was as a person to be who everybody wanted me to be, and that’s not — a cute look. …I don’t care if you’re in high school and you have glasses and braces and you don’t think you’re cool, people will like you for being you, no matter what. It’s impossible for people not to like you when you’re just being you. It really is. You will find a branch, … I have. I have a great group of friends now and we don’t have to impress each other. I’m not wearing makeup when I’m with them. I look ratchet. I’m looking ratchet when I’m with them. I’m in sweat pants. I am oily, greasy, sweaty. I don’t care. And we don’t have to prove anything to each other. And that’s what’s cool.

Thanks Bella for the interview.

She is sensational in Alexander and the Terrible, Horrible, No Good, Very Bad Day, go see it!!