I love this project!

I found an old table at a yard sale and probably paid $5 dollars for it, but it could have been less. My original idea for it didn’t work out, so I needed to “repurpose” it or get rid of it. It wasn’t until we considered removing the table’s top level that the seed of a creative idea began to germinate.

You probably already know I’m always looking for ways to encourage the study of STEM subjects. I encourage it for all children, and I make a special effort to encourage girls since they are historically underrepresented in Science, Technology, Engineering and Mathematics. 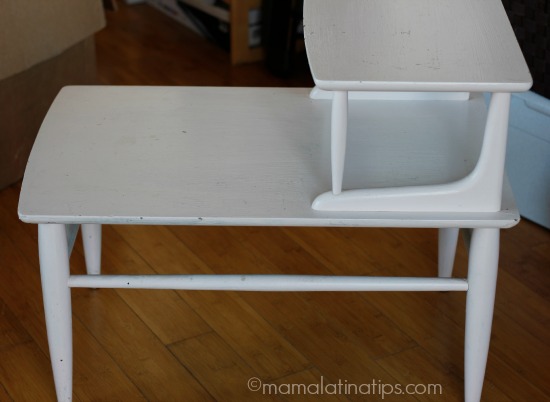 When the folks at Lowe’s asked me to come up with a project using Radiant Orchid, the Pantone Color of the Year, it all clicked: How about a chessboard that a girl could love? Chess is a game that requires logic and discipline, skills that serve STEM subjects well, as players must consider variations in strategy with every move.

The Lowe’s folks liked my chessboard so much they are featuring it in the March edition of the Lowe’s Creative Ideas magazine.

Here’s how it was made. 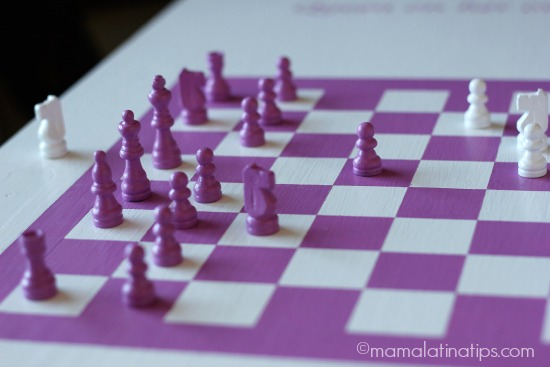 Then, I carefully measured out an inch-wide square frame (equal distance from the table’s edges) for the chessboard’s grid, and painted it Radiant Orchid. I let it dry, then applied another coat of paint.

I waited about a day allowing the paint to completely dry. Then, I covered the entire board with overlapping strips of painter’s tape. I carefully marked the chessboard grid pattern on the tape using a pencil and a ruler. I marked with a letter “R” the tape over each square to be painted Radiant Orchid.

With an exacto knife and ruler to guide, I very carefully cut the “R” squares out of the tape (being extra careful not to cut into the table). After removing the square cut-outs, I painted the exposed squares twice, leaving plenty of time for the first coat to dry before applying the second. Finally, when I was sure my Radiant Orchid squares were dry, I carefully removed the remaining tape to reveal the white squares. 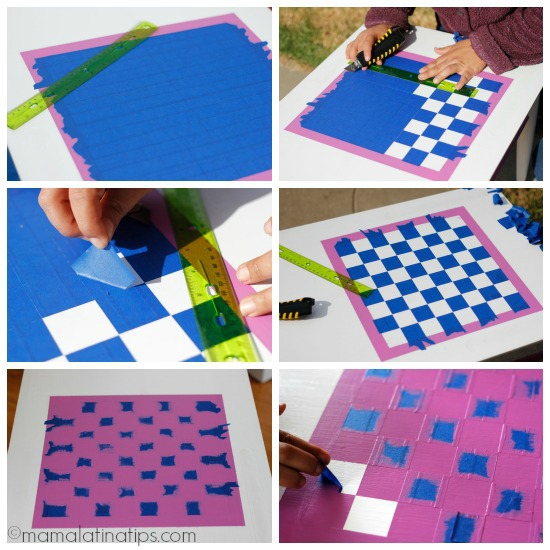 I wanted to add a stylish flare to the project. My husband suggested writing, “Queen on her own color,” which seemed to capture just the feeling I was looking for. So I stencilled the phrase onto the end. Here’s how.

First, using my computer, I printed the phrase onto a piece of paper after finding a font and size I liked. Then, I covered the back side of the paper with pencil. Next, I taped the printed paper onto the table pencil-side down, so it wouldn’t move when tracing. I traced the letter edges. Once traced, I carefully removed the paper revealing the lettering now transferred in pencil onto the table top.

Finally, I used a small paint brush to fill-in the letters with the Radiant Orchid paint. I let it dry well and then painted a second coat. 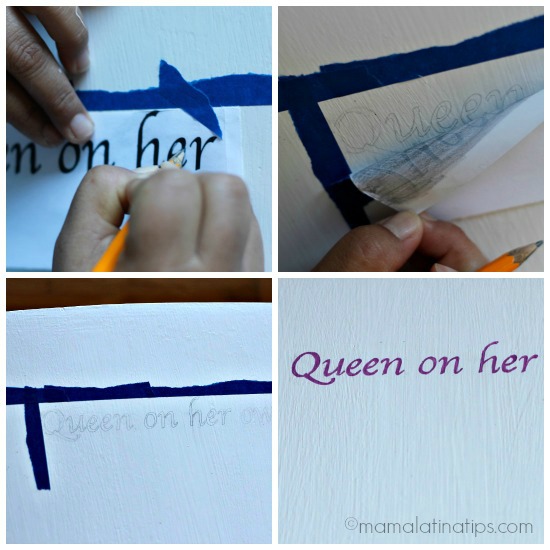 For the chess pieces, I simply dipped some old wooden ones I found into the Radiant Orchid and white paints.

What do you think? I’m so proud of my chess table! 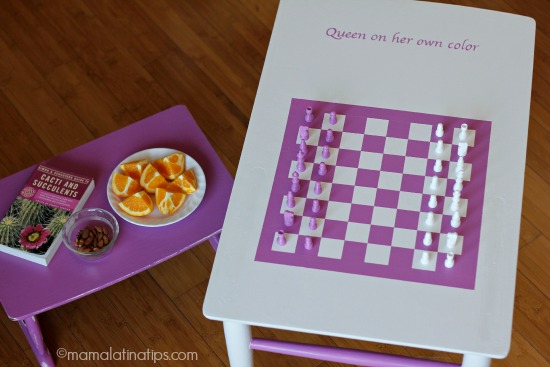 Are you game for some inspiration?  How about registering for the Lowe’s Creative Ideas magazine? It’s free, is published every three months, and comes directly to your home.

I love it!
I don’t know what’s my favorite part! from the color, to the painted chess pieces 🙂

“Mama Latina Tips is a participant in the Amazon Services LLC Associates Program, an affiliate advertising program designed to provide a means for sites to earn advertising fees by advertising and linking to amazon.com.”
Scroll back to top
21shares