We have a holiday wreath coming from the Cub Scouts later in the month, but I wanted something on the front door in the meantime to welcome guests and remind us all of the holiday season.

I wanted to do something easy and fast, and, of course, I wanted it to be bilingual. Things don’t have to be complicated to be fun.

I’ve always had a thing for bows. In fact, I prefer to have a bow on the top of my tree, rather than the traditional star. When I was a little girl I always had bows in my hair, on my dresses, even on my shoes!

So I headed down to Lowe’s, my go-to place for creative ideas, and looked around a bit. Here’s what I found: 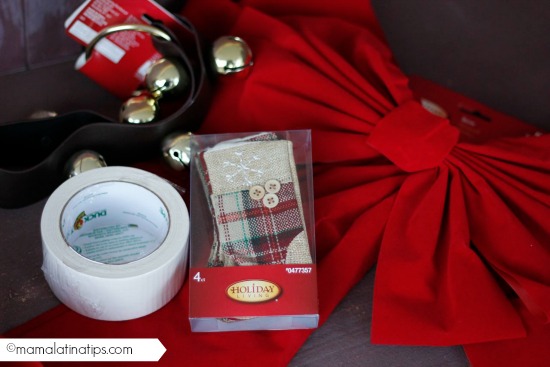 Using the white tape and red pen, write the words in Spanish and English (or any language you like) and paste them on the bow ribbons. Using safety pins or needle and thread, attach the little stockings to the ribbon as well.  Open the enclosure on the back of the bow, attach the metal round holder of the metal strap and the golden lazo cord and close it tightly.

This is the result. My kids love the sound of the bells when they open and close the door. (I had to limit them to two “extra opens” and two “extra closes” each, per day!) And I love when I can make things bilingual. A win-win. Plus, when that nice wreath comes later in the month, I will be able to incorporate the two together for an added pop! 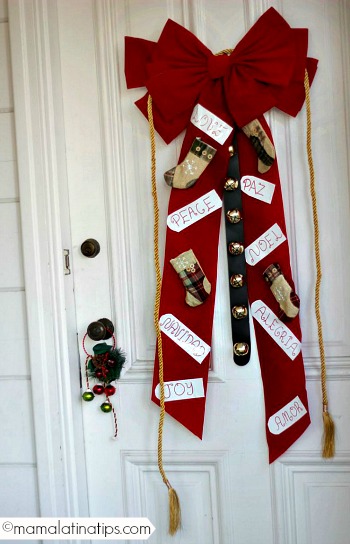 “Mama Latina Tips is a participant in the Amazon Services LLC Associates Program, an affiliate advertising program designed to provide a means for sites to earn advertising fees by advertising and linking to amazon.com.”
Scroll back to top
29shares