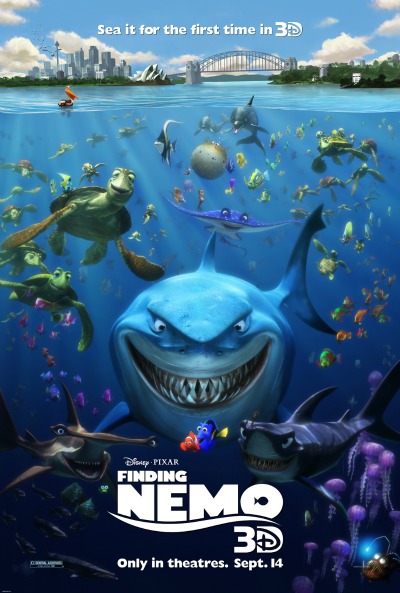 My husband and I went to the theater in May 2003 to see Finding Nemo. The family of a little girl I was taking care of highly recommended it.  We didn’t have children then, nor was I even pregnant yet, but we both love movies and we knew Pixar made good ones.

We left the theater with big smiles. And while there is no denying each character has its own charisma, our favorite always has been Dori. You remember her.  She’s the blue and yellow fish, voiced by Ellen Degeneres, with short term memory problems who helped Marlin look for Nemo in the vast ocean.  She’s the star in a number of my favorite scenes.

Who is your favorite character from Finding Nemo? 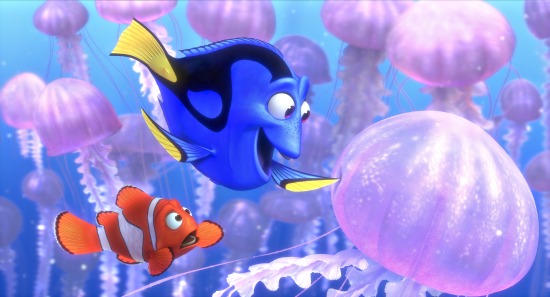 We enjoyed the movie a lot and we bought it as soon as it came out on video, never knowing that someday we would have two sons and it would become one of their favorite movies, too.

And well, after almost ten years from its original release in theaters, we have the incredible opportunity to let them see it on the big screen for themselves. Only this time, it is in 3D. Amazing! And on September 14th, you can enjoy it too. 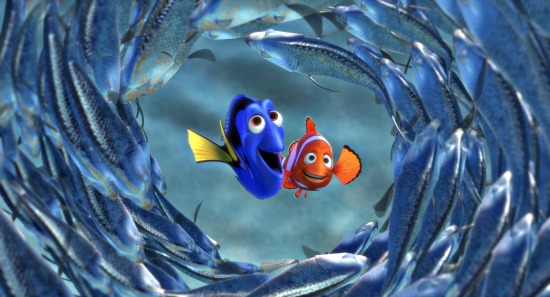 What so special about it?

If your kids haven’t had the chance to see Nemo in a theater, now is the perfect time for them to enjoy it on the big screen and in 3D.  The 3D technology is fantastic.  In other 3D films, things seem to jump out at you, right in front of your eyes, but in Finding Nemo the effect is the reverse really, it draws you into the film as if you are swimming with the characters, experiencing what it’s like to swim in the ocean.  It is truly extraordinary, the colors seem even more alive and the details pop.  You can almost count ALL of the great white shark Bruce’s teeth. Everything makes an impact, from the fishes scales to the whale’s skin.  Seeing it in 3D made me see details I’d never seen before.

Another great thing about going to the theater to see Finding Nemo in 3D is the short film PartySaurus Rex.  Disney/Pixar shows a new side of the lovable toys from Toy Story.  This time Rex is the star and it is the greatest fun.  I’m not going to say any more, but I am going to give you a little taste:

Do I recommend it?

Absolutely, Finding Nemo 3D and PartySaurus Rex truly are films for the whole family!  The colors are vibrant, the stories are brilliant. Disney/Pixar have done it again. 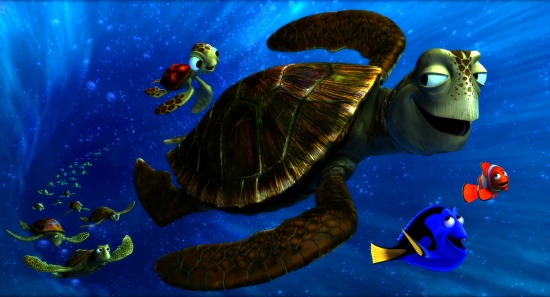 Plus, I invite you to come again soon because in a couple of days I am going to post video of an exclusive interview with Crush, the lovable daddy turtle who stole our hearts in Finding Nemo.  Don’t miss it!

Disclosure: I was invited to an event at Disney Studios.  Food, tickets and accommodations were provided.  As always my opinions and my love for Disney are my own.

“Mama Latina Tips is a participant in the Amazon Services LLC Associates Program, an affiliate advertising program designed to provide a means for sites to earn advertising fees by advertising and linking to amazon.com.”
15 shares
wpDiscuz
2
0
Would love your thoughts, please comment.x
()
x
| Reply