Beauty and the Beast in 3D, the two day Disneyland Park ticket for $99 dollars, and Oscar Martinez celebrating his 55th anniversary with the Resort, are just a few of the things happening in the Magic World of Disney this month!

The beloved Disney Classic, Beauty and the Beast, is coming to theaters in 3D this Friday, January 13th in select theaters.

The film was nominated for six Academy Awards®, winning Oscars® for Best Song, by the renowned Alan Menken and Howard Ashman, and Best Original Score by Menken.

“Beauty and the Beast” was the first animated feature to cross the $100 million plateau in its initial release.

Three years after the film’s debut, “Beauty and the Beast” hit Broadway. The musical opened at the Palace Theatre and ran in New York for 5,464 performances between 1994 and 2007, becoming the eighth-longest running production. It has played in 13 countries and 115 cities and continues to enchant audiences worldwide.

Rapunzel and Eugene are getting married!

If you love Tangled, you will pleased to know their wedding has been recorded and you can see it right before the feature presentation of Beauty and the Beast.  Another reason to hit the theaters this weekend!  Here is a taste:

On December 30th 2011, the Disneyland Resort honored cast member Oscar Martinez, who just celebrated his 55th anniversary with the Resort.

Oscar, a cook at Carnation Café on Main Street, U.S.A., began his career at Disneyland as a busboy. Over the last half century, he has trained thousands of cast members and has become a favorite of many guests who visit him year after year. Martinez is the first Walt Disney Parks & Resorts cast member to achieve this 55-year milestone and the first to receive the newly created 55-year Snow White-themed service award. 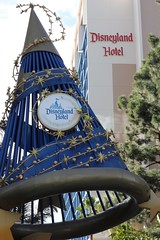 Check this out!  If you are a Southern California Resident, you can get a 2 day Disneyland ticket for just $99 dollars!!  You can get your tickets up to June 1st, 2012, the first time use must occur on or before June 8, 2012 as the tickets expire on June 9, 2012.  Purchase your 2 day Disneyland Ticket here. You can also find them at some retail locations, Disney Stores, and the Disneyland Resort ticket booth.

Have a magic day!!