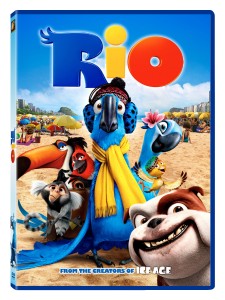 Rio tells the story of Blu (Jesse Eisenberg), a Spix’s Macaw captured as a youngster from his native land of Brazil to be domesticated thousand of miles away by his human owner Linda. His new owner soon discovers that he is the last male of his kind, and with that, the two head south to Rio de Janeiro to meet Blu’s new mate. However, it is nowhere near close to love at first sight between the socially awkward, flight challenged Blu and the strong and independent extreme flying female Jewel (Anne Hathaway). Shortly after Blu’s arrival, greedy animal smugglers capture the two rare birds and they soon find themselves helplessly lost in the Brazilian rainforest. Unexpectedly thrown together they embark on a hysterical and endearing adventure where they learn about friendship, love, courage, and spreading ones wings to fly.

And guess what?  Mama Latina Tips has three (3) DVDs to give away, one each to three lucky Mama Latina Tips readers!  Rio has one of the most beautiful scenes I’ve ever seen in an animated movie, it is the very first one when all the birds fly and sing and dance together!  This is my favorite part.  My kids liked the movie a lot and they like the special features, too, where you can see some favorite characters from Angry Birds, and who doesn’t like Angry Birds?

And of course it comes with both subtitles and audio in English and Spanish.  You know how much I like movies with Spanish audio, it helps my effort to teach my kids Spanish.

To participate for your chance to win one (1) of three Rio DVD’s is very easy,  just watch the trailer below and tell me your favorite part.  That’s it! That is your required entry.

Would you like more opportunities to win? I have a few of those, too!  These entries are optional:

This giveaway will end on Wednesday, August 10th, at 11:59 p.m. PST.  Open to US residents only.  Winner will be randomly chosen and notified via email. Winner must respond to notification email within 3 days or a new winner will be chosen.  Void where prohibited.  Entries/Comments that do not follow the submission guidelines will be invalid.  Have fun and good luck!

Disclaimer: I’ve received a media copy of the movie to facilitate this post.  All comments and opinions are solely my own.

Anni and I loved this movie!!!!! xoxoxo

My favorite part is when the birds fell off the cliff and landed on the hang glider.

When they talk about how you have to feel it your heart before you can fly… definitely my favorite part.